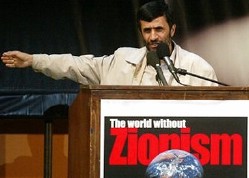 America, Britain, France, Germany, Australia and Canada are working together to persuade and pressure producers of uranium not to sell to Iran as international experts believe Iran’s supply of raw material to produce uranium is near exhausted, perhaps enough for a number of months.

In December, Britain’s Foreign and Commonwealth Office sent out a confidential request for its diplomats in Kazakhstan, Uzbekistan and Brazil, all major uranium producers, to lobby governments not to sell uranium products, specifically yellow cake, to Iran. Iran’s current stock remains from the supply received in the 1970s from South Africa. It should be pointed out that even if the international diplomatic efforts are successful, this alone will not prevent Iran from developing a nuclear bomb.

To reach weapons-grade uranium-235, Iran would have to produce a highly enriched fuel, and that requires thousands of centrifuges. It is estimated that 200kg of yellow cake could produce 1kg of weapons-grade (94 per cent enriched) uranium. About 20kg of highly enriched uranium are required for one bomb.

David Albright, founder of the Washington-based Institute for Science and International Security, said that Iran now had enough of this gasified uranium, stored in canisters weighing 10-14 tons each, to produce as many as 35 bombs, but it may run out of yellow cake to keep feeding the plant by the end of the year.

Beside the gas conversion facility, Iran also needs yellow cake to convert into pellets for fuel rods to run its Arak heavy water reactor. It also apparently wants large quantities of yellow cake to turn into low-enriched uranium for its new Russian-built reactor at Bushehr, in case Moscow reneges on a deal to supply nuclear fuel.

However, Tehran’s relative shortage of uranium exposes puzzling questions about its claims to be pursuing a purely peaceful civil nuclear energy program. It would need far larger quantities of yellow cake than it can produce from its own small mines to have sufficient fuel for a civil nuclear power program.

“You need 200 tons per year just for one 1,000 megawatt power station,” an IAEA source said. Iran has said that it wants to build 20 reactors, but the agency believes that the Iranians managed to process only 21 tons of uranium at a production centre at Bandar Abbas in southern Iran in one year, and plan to handle 50 tons a year from a new facility at Ardakan in the centre of the country, which is due to open later this year.