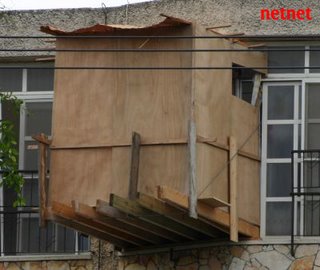 Jerusalem City Hall has implemented a new policy, halting the construction of sukkah balconies, resulting in a growing number of complaints from frum residents of the capital.

According to a report in the daily HaMevaser, the city has publicized a list of preconditions to submitting plans for the marpesot (balconies), including approval from most of the residents of the apartment building. Even if an applicant has obtained approval from neighbors, the city will no longer accept individual requests from residents, stating such requests will not be reviewed by the building committee.

According to a HaMevaser report, residents report that even if most of a building applies to build the sukka balconies, the building committee is not processing the applications. Some applications report the approval process may drag on for months or longer.

Building committee chair Kobi Kachlon states as far as he is concerned, there are no changes in policy and he has no problem approving sukka balconies. HaMevaser reports its investigation points to Jerusalem City Engineer Shlomo Eshkol as the source of the problem. HaMevaser continues reporting that “sources in City Hall express surprise over Eshkol’s position,” stating in the past, he would bend over backwards to assist the chareidi community but today, it appears he is doing everything possible to cause the sector grief.