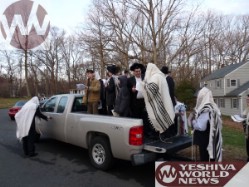 Residents of the northern Yerushalayim neighborhood of N’vei Yaakov are more than frustrated. All attempts to find a suitable location for a temporary shul have been met by refusal from Jerusalem City Hall, resulting in the closing of the shuls.

One idea from one of the regular mispalalim is to place a caravan home on a truck, which is permitting to park anywhere in the neighborhood. Therefore, they are not required to request a city permit as they struggle to permit a minyan in their area until such time a shul is built. The truck will move once in three months, in compliance with the law, thereby providing residents with a unique and hopefully acceptable solution that will not result in city inspectors coming to order them out of the area. Those involved in the effort indicate they already received halachic approval for davening in a caravan seated on the back of a truck chassis.

N’vei Yaakov, as is the case with other neighborhoods in the capital, is becoming increasingly chareidi but still lacks a proper shul. There is currently an estimated 900 chareidi families in the northern Jerusalem neighborhood and yet the three minyanim are held in a school, a caravan and basement. The “main” shul is located in Talmud Torah Darkei Torah.

Askanim admit they are perplexed. While City Hall admits it does not have a solution to offer, when residents found an empty structure and began using as a temporary shul, they were expelled by the city. The city decided to destroy the vacant structure even though a considerable amount of money was invested to improve it towards becoming a fitting host for a shul.