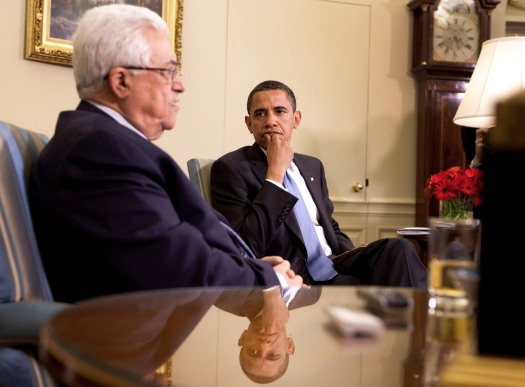 [VIDEO LINK BELOW] The PA (Palestinian Authority) is pleased with the warm welcome PA Chairman Mahmoud Abbas (Abu Mazen) received in the White House, particularly after President Barak Obama was unyielding in demands made of Israel, insisting on acceptance of the two-state solution and a total unconditional freeze of construction in all yishuvim.

Despite his waning support and the fact that his term expired a few months ago, the PA leader was warmly received in the White House, and PA officials are pleased with the position taken by the new American administration.

The PA will most likely adopt a sit-and-wait approach, realizing for now, the pressure is on Israel, not Ramallah, watching to see if the Netanyahu administration will comply with stern demands to halt all settlement construction. In addition, tempers are rising and opposition to Netanyahu from the right is growing as his government announces it will comply with demands to disassemble unauthorized outposts.

Abu Mazen is aware that for now, time is working in his favor and he is content accepting the welcoming hand at the White House and will permit the American administration pressure events back at home pertaining to Israel and a continuation of the diplomatic process.

Critics question just how the White House is resting all its support on a leader who does not command respect and lacks control, and by most accounts, would lose to Hamas is elections were held in PA autonomous areas today.