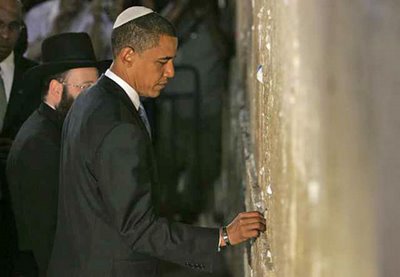 It is taking less time than most predicted for the new American president to lead to a sharp deterioration in relations between Jerusalem and Washington. The new president however seems to be gaining momentum as his popularity climbs among Arab nations and the Muslim world, the direct result of his announced policies that compromise Israel’s interests in a number of areas. In Jerusalem however, aides to the prime minister are seeking to downplay the strained relations following the first White House meeting between President Barak Obama and Prime Minister Binyamin Netanyahu.

President Obama is preparing for his appearance in Cairo, at which time he will reveal his master plan for regional peace. Following meetings with a number of prominent Arab leaders during his first days in office, the US administration is making its position clear, that despite ongoing Arab terror, a lack of compliance to signed agreements by the PA and Iran’s continued defiance of the international community, the White House will promote dialogue and tolerance towards Arab leaders while calling on Israel to halt settlement construction and to openly support the so-called two-state solution.

While officials in the Prime Minister’s Office continue to state the perceived diplomatic crisis between Jerusalem and Washington is a far cry from the media’s reports, stressing there are “differences of opinion” while both sides take first steps in becoming acquainted with one another, the prime minister is using his oratory skills as a seasoned career diplomat to sidestep Obama’s demands that he accept the plan that calls for the establishment of a PA (Palestinian Authority) state which would engulf a large portion of Yerushalayim as its capital. In addition, the government enjoys a broad consensus against White House calls for a total unconditional building freeze in all yishuvim throughout Yehuda and Shomron.

Some analysts believe President Obama’s insistence on the total building freeze is a tactic, one which he hopes will compel Mr. Netanyahu to accept the two-state solution, following which the White House will exhibit a measure of flexibility towards accommodating continued construction in Yosh to accommodate natural growth.

While the new American leader prepares to show he is personally undertaking a mission of peace in the Mideast by his upcoming Cairo address, by all intelligence accounts, Hamas is preparing for the next armed conflict, weapons smuggling into Gaza continues, Hizbullah is preparing to sweep the Lebanese elections, Syria refuses to cut ties with the ‘axis of evil,’ Iran, Hizbullah and Hamas, and Iran becomes increasingly bold in Tehran’s defiance of international sanctions, daring any Western nation to attempt to halt its nuclear enrichment program.

For now, back in Israel, the nation is occupied with the five-day ‘Turning Point 3’ national preparedness exercise, which encompasses many doomsday scenarios, seeking to evaluate the state of the nation, civilian preparedness, the military’s abilities and the response of many essential agencies during a time of national crisis.