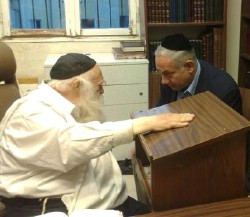 Prime Minister Binyamin Netanyahu is expected to visit HaGaon Rav Chaim Kanievsky Shlita in the coming days. It is being reported from Bnei Brak that the prime minister requested to meet with the Rav, and he was going to make the visit immediately following his Bar Ilan address on Sunday night.

The Rav’s gabbaim however did not want the prime minister arriving immediately following the address to avoid reports connecting the Rav to the political address or possibly having such a meeting interpreted as the Rav’s approval of the address. Therefore, the original Sunday night meeting was postponed and a meeting is expected to take place later this week.

Gabbaim announced that the meeting is apolitical and the prime minister is welcome as are all yidden, stressing brochos and politics are separate issues.