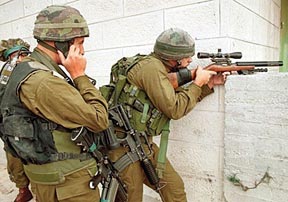 Two IDF officers and two civilians are in custody after opening fire at and beating a newspaper deliverer and his son during the night. The Kfar Yona residents fired at an Arab male who they told police they believed was an intruder during the early morning hours on Wednesday, as well as beating him with sticks.

The “suspicious intruder” was none other than the newspaper distributor who serves the area.

Police received a call close to 4:00am reporting a suspicious male in the community, adding a number of men went out to investigate, armed with bats. The newspaper man fled for his life, entering his vehicle where his 16-year-old son was waiting, and tried to drive off. This prompted the residents to open fire at him, aiming at the tires.

He did stop the vehicle, fearing for his life, at which point the men beat him, he told police. Police who responded to the call report they witnessed the suspect being beaten with bats and rocks.