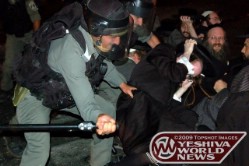 (Click HERE for 100 photos) Thursday did not bring a hiatus in protests in Yerushalayim. Thousands gathered in the Kikar Shabbos area and the scene was a repeat of earlier nights this week, with vandals setting public property ablaze, further destroying that which remains of the neighborhood as the residents struggle to prepare for shabbos amidst the mayhem.

Hundreds of protestors took up position on Shivtei Yisrael Street near Route 1, met with by formidable police presence working to keep the vehicular route open. Arrests were made including the Eida Chareidit’s Rav Yitzchak Shlomo Blau. Also detained by police were Avraham Breuer, son-in-law of Badatz official Rav Yurvitz, a grandson of the Vishnitz Rebbe Monsey, and a son-in-law of the Kretchniff Rebbe Shlita Jerusalem.

Stormy protests were also reported in Bet Shemesh and other chareidi areas around the country. In Yerushalayim, the violence appears to have escalated. In Bet Shemesh, the approximately 100 protestors closed Nahar HaYarden Street until police came and reopened the route. It appeared there were more rock-throwing attacks and destruction to public property. Eida official are signaling this protests will continue until the ‘Munchausen mom’ is released. Community leaders insist the entire matter is a blood libel against the chareidi community while police insist they have ample video footage and other evidence to support their case that the mother is indeed ill, and inflicted the damage to her son. At Hadassah, doctors and administrators reject all allegations that they are “cooperating with police” to permit them to build their case against the chareidi community.

Police used a water cannon and mounted forces moved in as well in an effort to maintain order. In Geula, cops were outfitted with riot gear, seeking to protect themselves against the hail of rocks thrown from every direction.

On Jerusalem’s Moshe Zachs Street, fireworks were hurled at police. On Moshe Caro Street, a vat of oil was poured onto the street. One mounted unit slid on the oil, but the policeman and his horse emerged uninjured.

At least 10 policemen were injured and dozens were arrested and detained for questioning. The President’s Residence has released a message that President Shimon Peres has ordered his staff to contact the involved parties, the chareidi leaders, police and Jerusalem City Hall, beginning to take steps to curb the violence before the situation escalates to catastrophe chas v’sholom.

The mother will be brought before a remand hearing on Friday morning, at 9:00am. The state will ask that she remain behind bars, maintaining her release will permit the chareidi community to get her out of the country, as well as facilitating efforts to sabotage the ongoing police investigation. The state is indicating it is willing to agree to her release under house arrest conditions outside of Yerushalayim, providing she agrees to a psychiatric exam prior to her release. So far, mom is unwilling to consent to a psychiatric exam.

Moshe Friedman, who is a member of the Munchausen mother’s family has released a message calling for calm and an end to the violence. “I repeat, in the name of the rabbonim and the family, please, stop, the violence is counter-productive and hurts our case. It diverts the public’s attention”. Friedman calls for calm law-abiding protest, tefilla, and tehillim.

In the meantime, Jerusalem Police Chief Franco is bracing for a stormy shabbos, preparing his forces for increased violence. The pashkavilim in Meah Shearim are calling for a shabbos afternoon protest over the opening of the Karta parking lot. Police fear the combination of the two issues may lead to yet more violence. Franco stated the police can deal with anything and additional manpower will be deployed if necessary, but he hopes the situation does not continue to deteriorate.

In one act of vandalism on Thursday morning, a number of chareidi youths were captured on film as they threw trash cans and other objects at a Geula social services office, eventually destroying a security camera. They also hurled rocks at the windows of the office. Police were summoned to extricate the workers from the office, who were unsuccessful in repelling the violent assault with fire extinguishers. As a precaution, teargas has been distributed to social workers employed by the city, fearing the violence may spread to other neighborhoods.

Chief Franco has indicated he feels the rabbonim are not doing enough to openly condemn the violence and call for an end to the destruction and attacks.

On the other side of the coin, the chareidi media continues to report police are treating detainees with brutality, decrying the entire affair, distancing itself from the vandalism and violence and focusing reports on the unjustified accusations against the mother, and the blood libel against the chareidi community.