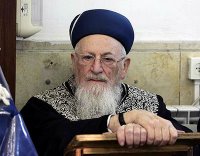 Talmidim of the Rav circulated a message on Thursday called on one-another to increase tefillos and tehillim on the Rav’s behalf. Tefillos took place in the Rav’s shul on Reinis Street in Kiryat Moshe, Jerusalem. HaGaon HaRav Reuven Elbaz Shlita was expected to take part in Thursday’s atzeres which began at 2:00pm.