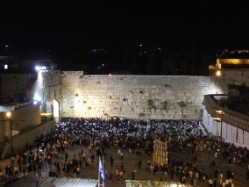 Rabbonim are concerned, and voicing their protest over ongoing efforts by Jerusalem City Hall to encourage Evangelistic Christians to visit Jerusalem, setting its goal at 10 million visitors a year.

According to a HaMevaser report, at a city council meeting on Thursday, in which Christian activists and members of the International Christian Embassy in Jerusalem (ICEJ) participated, the council approved the city’s tourism office’s program to expand efforts to attract a greater number of Evangelistic Christians.

The city has categorized the Christian visitors as a ‘preferred’ group and Mayor Nir Barkat plans to put his money where his mouth is, willing to invest to reach his goal of 10 million visitors to the capital annually.

Mr. Berman, a representative of the ICEJ spoke of the difficulties in attracting larger number of Christian visitors in the past, explaining in the years preceding the current administration, the atmosphere in City Hall was not exactly friendly, not seeking to bring more Evangelist Christians to the capital.

The council spoke of the need to improve and glorify Christian sites towards attracting more visitors, in line with the decision to dedicate this year to bringing larger numbers of Christian pilgrims.

Rabbonim are complaining over the shift in City Hall’s policy, a move they believe will leave Jerusalem ‘exposed’ and a larger Christian presence will diminish the holy atmosphere of the Holy City.

Yad L’Achim activists are concerned that such a move may result in stepped-up missionary activities in the capital.