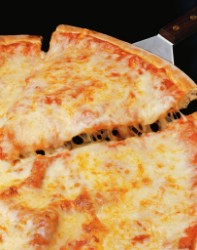 Now for the explanation – About a year ago, the Eida learned the stores used the ‘call forwarding’ feature during busy hours, referring phone orders to other stores owned by the same entrepreneur in the capital, but those stores are not under the Eida Chareidit, but the Jerusalem Rabbinate, non-mehadrin.

The kashrut agency picked up on what was taking place and decided to offer the store an alternative, to pay for a mashgiach timidi (full-time) or give up the hechsher. They opted for the full-time mashgiach.

On Purim, both stores were closed. An Eida official decided to test the integrity of his client, phoning the pizza shops and ordering many pies. They pies were delivered, piping hot, fresh from the Jerusalem Rabbanut stores with the customer supposed to believe they were from the Eida Chareidit stores.

The kashrut agency promptly removed the hecsher from both.