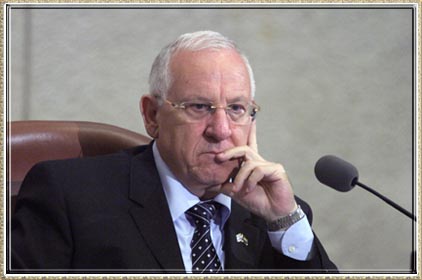 Knesset Speaker (Likud) Reuven Rivlin spent much of Sunday morning speaking with various radio stations, supporting Israel’s policy to continue construction in the capital. He also addressed the need to set certain parameters regarding the future of Yerushalayim, as well as the speaking about the Monday evening re-dedication of the Churva Shul in the Old City of Yerushalayim.

The speaker rejects any and all attempts by Arabs to connect the re-dedication to the Har HaBayis and al-Aqsa issue, telling Kol Chai Radio that Rav Yehuda HaChassid arrived in Eretz Yisrael and understood “political realities”, the inability to move ahead and rebuild the Beis HaMikdosh, compelling him to construct the “Mikdosh Me’at”, in this case the Churva Shul. He purchased property and moved ahead with the project. Yes, it is small, and its original structure was simple at best, but it was no less significant.

Rivlin explained that the rav understood that moshiach was not here today, but the shul had to be built in the duration. The original shul was destroyed at the end of the 18th century, and then he spoke of the arrival of his late parent in 1889, and how they began thinking how to restore the shul, which was accomplished some 50 years later. That was destroyed by the Jordanians in the 1948 War of Independence.

Mr. Rivlin explained that while America’s special relationship with Israel is extremely important, the United States must learn there are red lines and there matters on which there may not be agreement. Rivlin stresses Yerushalayim is our inheritance and right, with or without American approval. “We mustn’t cut the tree we sit on” he explained, regarding our right to the capital, Yerushalayim, a G-d given right.

Rivlin used a quotation from the Jordanian commander after his troops destroyed the shul against in 1948, with the commander pointing out “For the first time in 1000 years, not a single Jew or Jewish building remains in the Old City and the Jewish return will be close to impossible”.

Rivlin believes the Arabs must understand that Israel will never leave Jewish areas of the capital, which the world must realize are forever, including N’vei Yaakov, Ramot, French Hill and Ramat Shlomo, stating the building here is not controversial since it is Jewish Jerusalem.