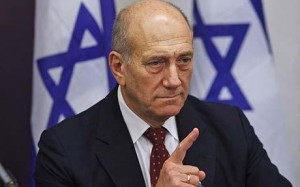 The prosecution on Thursday morning requested a change of schedule, explaining to the court that the breaking developments surrounding the Holyland case, which involves Uri Messer, a star state witness in the ongoing trial against former Prime Minister Ehud Olmert presents a problem. As such, the state requested changing to the Rishon Tours case and placing the Investment Case trial on hold pending further developments in the Holyland case, which was published on Wednesday following the partial lifting of a gag order.

In addition, “due to personal reasons”, a member of the Olmert defense team also requested a break from legal proceedings. The defense also told the court that “there is a storm outside” and the trial cannot be conducted under such an atmosphere, requesting a delay. The court halted trial proceedings until May 6th. Defense attorney Zohar explained that in May there will only be 4 or 5 sessions, so he is pleased with the delay.

Regarding the breaking Holyland case, which appears to also involve Olmert, who is currently in the USA, Olmert spokesman Amir Dan and attorney Eli Zohar told the press that in the past “we have seen cases that break with a big media fanfare” but ultimately, as they unfold, the true realities of the case are learned, a far cry from the earth-shattering media splash that existed.

They are confident that Olmert will not be arrested in the Holyland case although persons close to the case signal the former prime minister will be questioned and possibly arrested. It should be pointed out the Holyland project was approved during Olmert’s tenure as mayor of Jerusalem.

Attorney Zohar pointed out that his client was not requested to curtail his visit abroad, where he is taking part in a number of “important pre-planned events” and this to him signals the former prime minister’s involvement will be minimal if at all.

Zohar also blasted the state for immediately placing gag orders on cases such as Holyland, explaining “the only ones barred from speaking are us, while the state releases statements at will”. Mr. Zohar added a gag order lends an air of mystery and guilt to a case, resulting in a hostile atmosphere for his client and others in a similar situation. He also stated that the defense is working in a fog as the state continues conducting behind the scenes investigations, compromising his ability to defend his client.