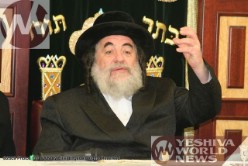 Rav Yisrael Hager Shlita, the son of the Vishnitzer Rebbe Shlita, delivered an address to mark the beginning of a new ‘zman’ following the Pesach vacation. The address was delivered in Brechfeld in Modi’in Illit, during which the Rav stated it is absolutely forbidden to read the daily chareidi newspapers.

Rav Hager stated it is absolutely forbidden for a yeshiva bachur to read the chareidi dailies, adding they should also not carry cellular telephones because they can damage one’s neshama. Rav Hagar added a bachur should also not travel to Meron on Lag B’Omer, stressing he makes the statements in the name of his father, the Rebbe Shlita.

After the Rav delivered his words, hundreds of bochrim lined up to wish him a mazel tov on his 65th birthday.

Kikar Shabbat reports that HaMevaser responded with a statement that it prefers not to respond. Efforts to obtain a response from Hamodia were unsuccessful.