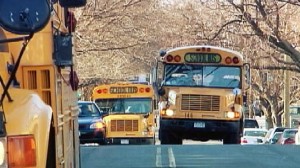 New York City’s schools chancellor says school bus drivers should take up their dispute with the court, not on the children.

Local 1181 of the Amalgamated Transit Union announced Monday more than 8,000 bus drivers and matrons would participate in a strike, beginning Wednesday.

Walcott said the state appeals court last year ruled that what the union is demanding is illegal.

The dispute is over job protections. The city has put bus contracts with private bus companies up for bid.