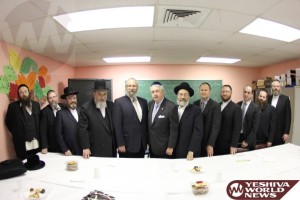 The District Attorney first toured the JCC offices meeting the staff and learning firsthand about the important services being offered by JCC for the community. He then sat down for a meeting with JCC Board members and community leaders.

In a wide ranging discussion the DA spoke about some of the many programs his office is involved in to help reduce crime in Brooklyn. Some of the issues that he talked about were his program to rehabilitate criminals rather than just incarcerate, as well as a very successful program to integrate released prisoners back into society. The DA released statistics showing that these programs greatly decrease the rate of recidivism, which is the chance that these individuals will be re-arrested.

The DA also touted his partnership with the NYPD as well as the vital work of the Shomrim in helping keep our communities safe. He repeatedly reminded the group how rampant crime was at one time and forcefully stressed that “we are not going back there.”

BPJCC, an affiliate of Met Council, was founded to serve Boro Park and surrounding areas with all their social service needs, including Medicaid and Child Health Plus, food stamp enrollment, employment services, crisis assistance, immigration and services to seniors and holocaust survivors.