The three greatest yartzeits in Eretz Yisrael are R’ Shimon on Lag Be’omer in Miron, The Ohr Hachaim Hakadosh on the 15th of Tamuz on Har Hazeisim, and the Belzer Ruv Z”L, Reb Aharon, on the 21st of Av on Har Hamenuchos. These three Tzaddikim attract the largest crowds on their yartzeits. It’s interesting that these three yartzeits always fall on the same day of the week. This year it is on Thursday.

This Thursday, tens of thousands of people will flock to the tzion of the Belzer Ruv, Reb Aharon.

It’s difficult to describe what the Belzer Ruv means for so many Yidden. His great holiness, and the astonishing stories told about him are still inspiring many Yidden today.

The Imrei Emes of Ger said about the Ruv Z”L, that even if he would have lived several hundred years earlier he would have been a novelty. In the generation before and after the Holocaust, he was definitely an unbelievable novelty.

The Ruv Z”L was stringent and meticulous in every mitzvah and in every minhag yisroel, but he said, “I’m not a “frumer”, everything I do has a source. Learn and you’ll understand.” Indeed, for the Belzer Talmidei Chachamim it is a challenge and a rewarding experience to find the sources for everything that the Ruv Z”L was doing.

During World War II, when the Ruv Z”L was in the Ghetto of Bochnia, one of the poskim in the Ghetto was overwhelmed with the difficult questions he received and felt it beyond him to answer. He went to the Ruv Z”L to ask for help. The Ruv Z”L was hesitant to answer because he didn’t get involved with pesak halachah and refrained from demonstrating his Torah knowledge. But the posek was adamant that if the Ruv will not help him, he’ll discontinue answering. The Ruv Z”L definitely didn’t want that to happen, so he responded to the questions. The posek was astonished by his breadth of knowledge, and said, “The Ruv Z”L brought up remote responsa from the Rashba to clarify the halachah”.

The great Gaon Rav Meir Arik, one of the greatest lamdonim of Galicia said he never saw a parallel to the Ruv’s breadth in Torah knowledge and to the hasmadah of the Imrei Emes, the Gerrer Rebbe.

The Kedushah and Holiness of the Ruv Z”L was extraordinary. The Ruv Z”L never did anything purposelessly, everything had a deeper meaning. He always sat at the edge of his chair and never did anything for leisure or comfort. His madreigos and kedushah in eating are unfathomable to us.

Although he was so detached from this world, he cherished every Jew, even the ones who were very far from Yiddishkeit, and saw only good in them. 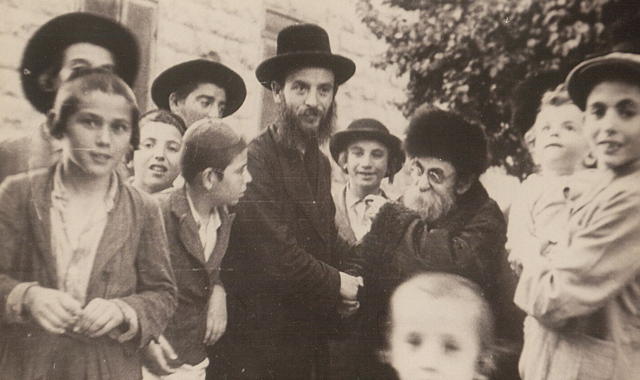 A Fascinating Photo where the Ruv ZL lovingly shows a boy that he should grow Chasidish Payos.

The worst thing for the Ruv Z”L was to express negativity about another Jew. If such a thing happened, he ordered the individual to ask mechilah and to repeat three times the opposite of the negativity expressed. The Ruv Z”L referred to a mechalel shabbos as a שוכח עיקר שבת (one who forgot about Shabbos). In the presence of the Ruv Z”L, when one spoke about secular Jews they had to refer to them as “Yidden who don’t put on Rabbeinu Tam’s Tefillin” (the second pair of tefillin that Chasidim don after davening).

When talking about Eretz Yisroel, one was never allowed to talk negatively in the presence of the Ruv Z”L. Once, there was fruit from Eretz Yisroel laying on the table, and one of the gabbaim said that they are small and bitter. Upon hearing those words, the Ruv Z”L was taken aback and ordered him to repeat three times “The fruit are beautiful, big, and sweet”.

The Ruv Z”L said of the last few generations that the “doros” (generations) plummeted spiritually a thousand years. Although the Ruv Z”L was on madreigos that are unfathomable to us, he still had an unbelievable understanding of his generation. His advice is relevant today as ever.

Reb Yochonan Rachmestrivker was close to the Ruv Z”L and frequently visited. Once Reb Yochanan asked for a beracha for a bochur that he should be a masmid. The Ruv Z”L responded, “Is that so? From now on call the bochur ‘masmid’. Since then the Ruv Z”L also called that bochur ‘masmid’ when he came to visit. This had a profound impact on him and he started learning diligently.

Once an individual from Yareslov (a village in Galicia), had a dangerously sick child and the doctor ordered that he eat food that contained pork. The Yid was distressed and asked the Rav of Yareslov what to do. Without a question the Rav responded that the child must certainly eat it. The Yid was very distraught about it, and said that he will travel to Belz and ask the Ruv Z”L what to do. The Rav said, “if you do so, please come back to me and tell me what the Ruv said.” The Yid traveled to Belz and asked the Sheilah. The Ruv Z”L answered that the local Rav is right and he has to give it to his child to eat. “But”, the Ruv Z”L added, “make sure chas vesholom that your child does not know that it contains pork”, so it shouldn’t affect the child’s chinuch.

The Ruv Z”L gave instructions to teachers that they should have a stick but they should not use it. Although today we don’t have sticks… still we learn that there has to be fear, but love should be what the teacher uses. 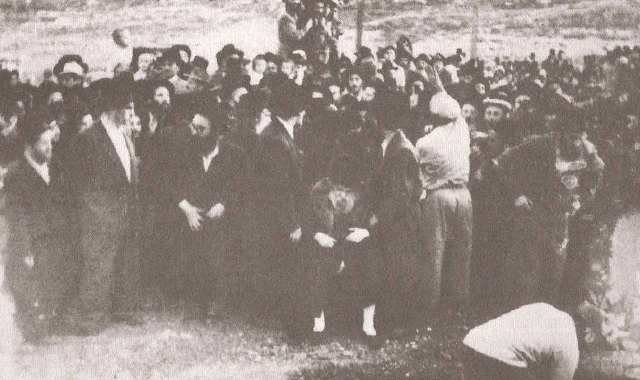 At the Ground Breaking of the Yeshiva in Yerushalayim, a few years before the Ruv’s passing.

The Ruv’s Z”L greatest focus after the war was to build the Yeshiva of Belz. He was involved in every detail and was very grateful for anyone who helped with it. Many people saw great yeshuos by taking part in the Yeshiva’s financial needs. The Ruv Z”L said that the gabbaim should announce, “Whoever supports the boys learning in my yeshiva, it is as if he has given to me personally!” This is an exceptional promise, taking into account that the Ruv Z”L said several times, “Baruch Hashem, I never remained owing anyone a favor”.

On the World of Belz website you can seize the opportunity to connect to such a great Tzaddik. We will send your Kvittel to the Tzion of the Rebbe on the day of the Yartzeit and be zoche to Yeshuos and abundance of Berachos, by clicking here.