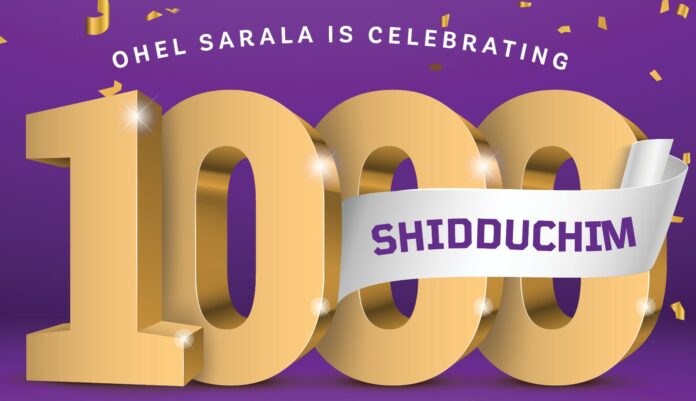 When Ohel Sarala was first established by Rabbi Chaim Aryeh Zev Ginzberg, rov of the Chofetz Chaim Torah Center of Cedarhurst, few people could have anticipated that it would take off as powerfully as it did.

Almost no one could have predicted that it would facilitate an astonishing 1,000 shidduchim in just a few years.

Now, in 2020, Ohel Sarala is celebrating the phenomenal achievement of its 1,000thshidduch, brought about through the koach of tzedakah and tefillah.

Ohel Sarala has seen 1,000 engagements of young men and women, who were empowered not to focus only on their own hardships, but to channel their energy, hope and aspirations toward others who suffer. The combined efforts and tefillos of these two seemingly disparate groups have yielded miraculous results. In addition to singles who have met their bashertes, several hundred children have been born to couples who were struggling with the pain of infertility.

The milestone of 1,000 shidduchim comes at a time of daunting challenges for Klal Yisroel, which is still in the throes of an unprecedented pandemic that saw the lockdown of communities across the world. Rabbi Ginzberg himself, as was well publicized, endured a difficult battle with Covid-19. With rachamei Shomayim, and thanks to the tefillos of Klal Yisroel, Rabbi Ginzberg was discharged from the hospital a few weeks ago following a miraculous recovery. Rabbi Ginzberg still needs our tefillos for a complete refuah, and all are asked to daven for Chaim Aryeh Zev ben Aidel.

Veteran shadchanim Mrs. Lisa Elefant, director of Adopt-a-Shadchan, and Mrs. Mindy Eisenman of YU Connects will lead a fascinating panel discussion on the topic of “How Covid-19 is Affecting the World of Shidduchim.” Questions for the shadchanim may be submitted by email to [email protected].

The entire program will be streamed live online starting at 9 p.m. Those who wish to participate via tele-conference can do so by calling 605.313.5333 and entering access code 752698.

This is a livestream event not to be missed. Join the families of the 1,000 chassanim and kallahs who have merited their personal yeshuos thanks to the impact of Ohel Sarala. Be inspired by the potency of tefillah and the influence one can have when acting for the benefit of their fellow Yidden. 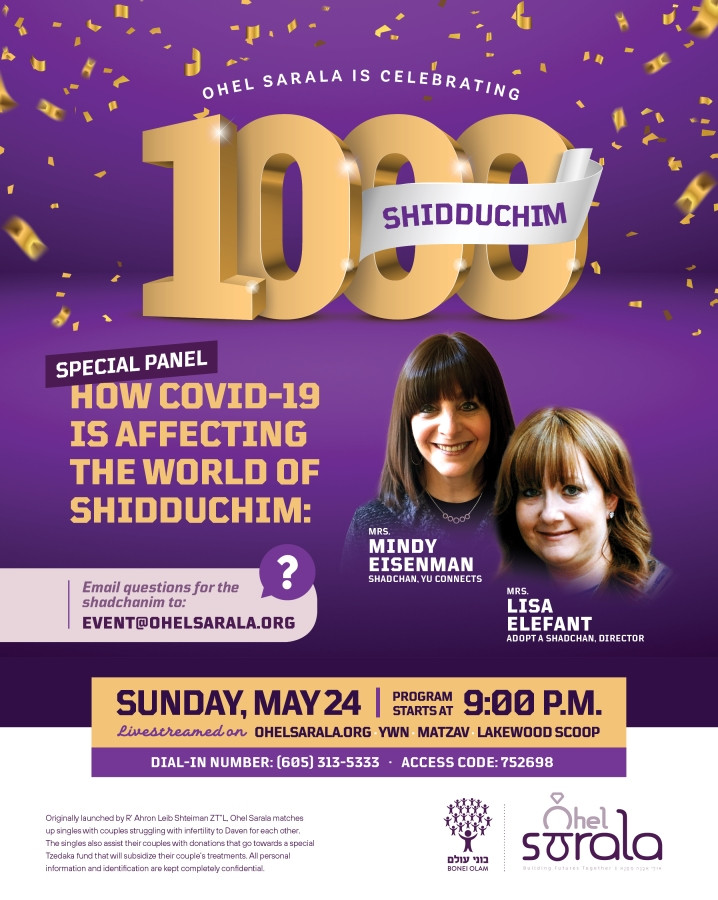 The Story of Ohel Sarala

It was approximately three years ago that Rabbi Shlomo Bochner, founder of Bonei Olam, the global organization that offers support to couples struggling with infertility, visited Rav Aharon Leib Shteinman zt”l, who lamented that there are two major tzarosfacing Klal Yisroel that keep him up at night: older girls who have not yet found their zivugim and couples struggling to bear children. Rav Shteinman explained that these two tzaros are connected to each other, and that if singles would share in the pain of the childless couples and the childless couples would in turn daven for their single counterparts, they could each merit a yeshuah.

When Rabbi Ginzberg heard this from Rabbi Bochner, he and his rebbetzin launched Ohel Sarala as an eternal zikaron and zechus for their beloved daughter, Sarala a”h, who passed away from illness at age 17.

As a rov, Rabbi Ginzberg has spent much time and effort comforting singles searching for their bashertes. This idea was the perfect initiative to form a new partnership. Bonei Olam has a database of couples who are their beneficiaries.

Bonei Olam and Ohel Sarala thus entered into a holy alliance. Ohel Sarala represented renewed hope to young couples and singles, a fulfillment of the sacred mission of Rav Shteinman.