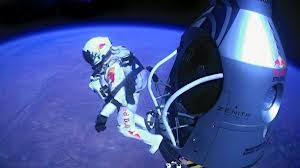 Supersonic skydiver Felix Baumgartner was faster than he or anyone else thought when he jumped from 24 miles up.

The Austrian parachutist known as “Fearless Felix” reached 843.6 mph, according to the official numbers released Monday. That’s equivalent to Mach 1.25, or 1.25 times the speed of sound.

His top speed initially was estimated last October at 834 mph, or Mach 1.24.

Either way, he became the first human to break the sound barrier with only his body. He wore a pressurized suit and jumped from a capsule hoisted by a giant helium balloon over New Mexico.

Baumgartner was supersonic for a half-minute — “quite remarkable,” according to Brian Utley, the official record-keeping official who was present for the Oct. 14 feat. His heart rate remained below 185 beats a minute, and his breathing was fairly steady.

“He jumped from a little bit lower, but he actually went a little bit faster, which was pretty exciting,” said Art Thompson, technical project director for the Red Bull-sponsored project.

“It’s fun for us to see reaching Mach speeds and proving out a lot of the safety systems,” Thompson said in a phone interview from his aerospace company in Lancaster, Calif.

Thompson said everything pretty much unfolded as anticipated, with no surprises in the final report. The updated records were provided by Utley, official observer for the National Aeronautic Association’s contest and records board. Utley was in Roswell, N.M., for Baumgartner’s grand finale jump.

In the foreword of the 71-page report, Baumgartner said he never imagined how many people would share in his dream to make a supersonic free fall from so high.

Some 52 million people watched You Tube’s live stream of the exploit.

The scientific and engineering experts who helped bring him back alive “broke boundaries in their own fields just as surely as I broke the sound barrier,” Baumgartner wrote.

Baumgartner shattered the previous record for a free fall plunge, made by Joe Kittinger, an Air Force officer, in 1960. Kittinger did not quite reach supersonic speed during his jump from 19.5 miles up.