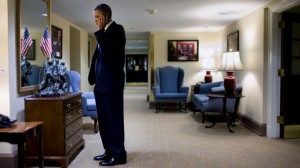 The President speaks from the White House on the shootings in Arizona and on Congresswoman Gabrielle Giffords.  Full transcript below:

THE PRESIDENT: As many of you are aware, earlier today a number of people were shot in Tucson, Arizona, including several who were meeting at a supermarket with their congresswoman, Gabrielle Giffords. We are still assembling all the facts, but we know that Representative Giffords was one of the victims. She is currently at a hospital in the area, and she is battling for her life.

We also know that at least five people lost their lives in this tragedy. Among them were a federal judge, John Roll, who has served America’s legal system for almost 40 years; and a young girl who was barely nine years old.

I’ve spoken to Arizona governor Jan Brewer and offered the full resources of the federal government.  A suspect is currently in custody, but we don’t yet know what provoked this unspeakable act.  A comprehensive investigation is currently underway, and at my direction, Director Bob Mueller is en route to Arizona to help coordinate these efforts.  I’ve also spoken to the Democratic and Republican leaders in the House.

Gabby Giffords was a friend of mine.  She is not only an extraordinary public servant, but she is also somebody who is warm and caring.  She is well liked by her colleagues and well liked by her constituents.  Her husband, Mark Kelly, is a Navy captain and one of America’s valiant astronauts.

It’s not surprising that today Gabby was doing what she always does — listening to the hopes and concerns of her neighbors.  That is the essence of what our democracy is all about.  That is why this is more than a tragedy for those involved.  It is a tragedy for Arizona and a tragedy for our entire country.

What Americans do at times of tragedy is to come together and support each other.  So at this time I ask all Americans to join me and Michelle in keeping all the victims and their families, including Gabby, in our thoughts and prayers.  Those who have been injured, we are rooting for them.  And I know Gabby is as tough as they come, and I am hopeful that she’s going to pull through.

Obviously our hearts go out to the family members of those who have been slain.  We are going to get to the bottom of this, and we’re going to get through this.  But in the meantime, I think all of us need to make sure that we’re offering our thoughts and prayers to those concerned.