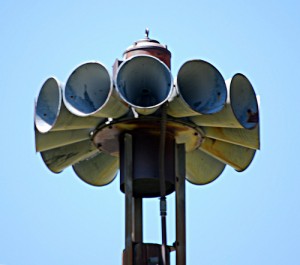 [VIDEO IN EXTENDED ARTICLE] An air siren sounded off across the country at 19:00 on Wednesday as part of a nationwide civil defense drill.

During the week-long “Turning Point 5” drill which began Sunday, the Home Front Command, Defense Ministry’s National Emergency Administration, Israel Police and other emergency services will test their responses to a massive bombardment of missiles from Lebanon, Syria, Gaza and Iran.

The authorities asked people to enter protected spaces when they heard the siren. In southern Israel, the target of repeated rocket attacks from the Gaza Strip, two sirens went off by mistake, instead of one as in the rest of the country.