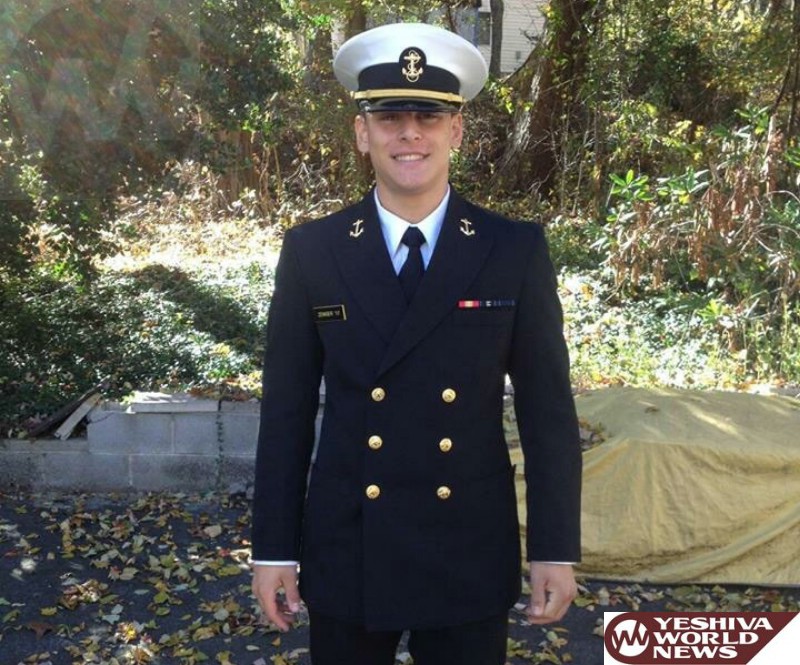 The Levaya for United States Naval Academy Midshipman Justin (Avraham Yitzchak) Zemser Z”L will be held on Friday morning. The 21-year-old resident of Far Rockaway, Queens, was one of the eight victims in the Amtrak crash in Philadelphia this week.

Justin was studying at the United States Naval Academy in Annapolis, Maryland, and on his way back home. He was an only child.

The Achiezer Organization was responsible for preventing any autopsy, and arranged for the local medical examiner to expedite the release of the body.

A large Naval contingency is expected at the Levaya which will be held on Friday morning at 11:30AM, in Boulevard Riverside Chapel, 1450 Broadway, Hewlett, New York 11557.

The following statement was given to YWN by his parents:

“Our son was Midshipman Justin Zemser. He was born on March 25th in 1995. He was his high school’s valedictorian and was just finishing his 2nd year as Midshipman at the United States Naval ACademy.

He was a loving son, Nephew and cousin, who was very community minded.

This tragedy has shocked us in the worst way and we wish to spend this time grieving with our close family and friends. At this time we ask for privacy from the media.”

I am deeply saddened by the loss of U.S. Naval Academy student and Rockaway Beach resident Justin Zemser in last night’s train derailment. In his short life, Justin served as an inspiration to all our families in Rockaway and exemplified the very best our community has to offer. As a lifelong resident of Rockaway, I feel proud to have been a neighbor to this true American hero. Our families have faced such great hardship in recent years following Superstorm Sandy and it is through the service and leadership of young men and women like Justin that we managed to come together in our recovery.

As a father of two young children, my heart goes out to the Zemser family at the loss of their only son. I extend my most sincere condolences to them during this time of unimaginable pain.