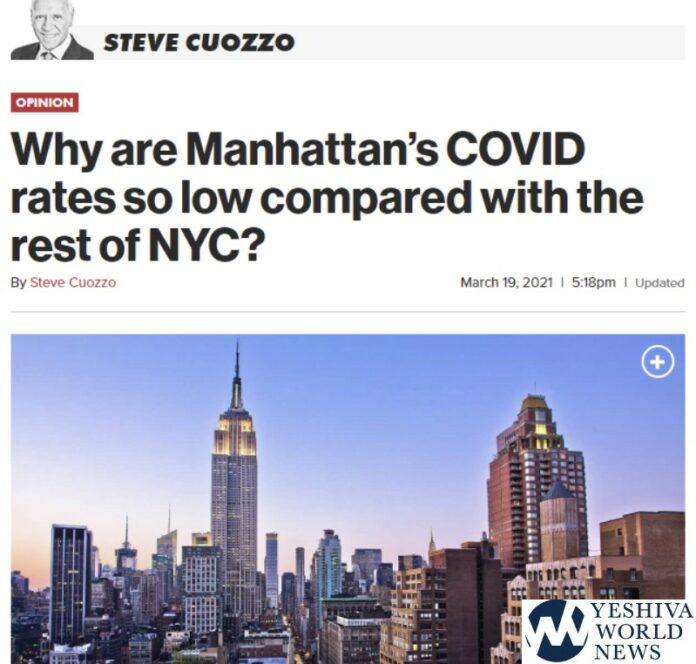 It seems the NY Post, is back to one of its favorite pastimes, attacking the City’s Orthodox Jewish community.

In a completely bigoted op-ed totally devoid of reason, Steve Cuozzo asks why Manhattan’s Covid positive rate is so much lower than the rest of the city. Astoundingly, he then proceeds to suggest that this may be due to ” large, often mask-less ultra-Orthodox gatherings ” and that “Manhattan has none of the huge Hasidic congregations found in Brooklyn and Queens.” In other words, Cuozzo is saying that it is the Orthodox Jews who are somehow responsible for the higher covid rate across the entire city of NY.

Yet a quick glance at the facts reveals how irrational and untrue this is. Cuozzo states that” Manhattan’s current new-infection rate is in the mere 2-plus percent range; it’s above 4 percent in The Bronx, Brooklyn, Queens and Staten Island, per state data.” The question is why are the covid positivity levels in the Bronx so high? In fact, there are areas in the Bronx with positivity rates approaching 10 percent. Yet the Bronx is far closer to Manhattan then to Brooklyn and these neighborhoods have no Orthodox Jewish population. Moreover, there are areas in Brooklyn with positivity rates below 2% percent that are situated right next to large orthodox populations. None of that fits Cuozzo’s prejudiced Armchair theorizing.

And so a mere casual investigation is all it takes to completely debunk the lazy sloppy, bigoted musings of an anti-Semitic Manhattenite that somehow gets to write for a paper with the fourth highest circulation in America. This says all one needs to know about standards at the NY Post.

It needs to be pointed out that Mr. Cuozzo is a coward as well. While he has no issues blaming positivity rates in the Jewish community on behavior, he makes no such connection with regards to positivity rates in other communities that are likewise much higher then Manhattan. Rather he claims this might be due to Manhattan’s higher income levels and better overall health than in the outer boroughs. So when large gatherings in the Bronx are busted, such as 557+ people at a warehouse party this past November it is the areas lower income relative to Manhattan that is somehow to blame not the behavior of the participants. This illogical nonsense is due to Mr. Cuozzo fear of criticizing the communities in the Bronx who are protected by the establishment media. Orthodox Jews on the other hand are easy targets for gutless bigots like him.

That the NY post must apologize to the orthodox Jewish community and fire Steve Cuozzo is obvious to every sane person desiring to live in a tolerant and fair metropolis. Unfortunately, the Post being essentially just a tabloid rag, false inflammatory smears against Jews are standard fare. What a disgrace.