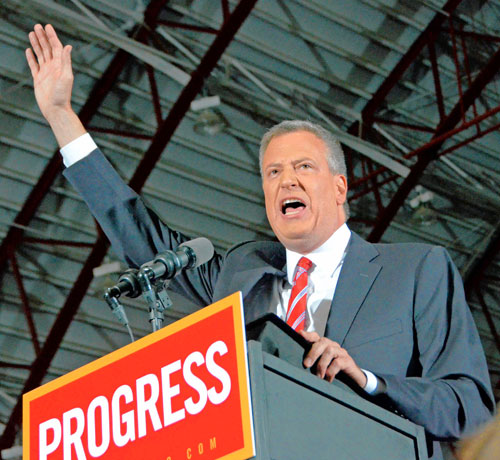 Not that most of us ever had a doubt, but there is now no question about it. NYC’s new liberal demagogue mayor is a despicable hypocrite, and he must be called out.

Just a few months ago, the Jewish community was stunned to learn the horrible news that Menachem Stark Z”L had been abducted and murdered, his lifeless and burned body found smoldering in a dumpster. If the story itself wasn’t enough pain to bear, what followed next was outrageous.

The New York Post featured an image of the deceased Stark on the front page of their January 5 edition with the headline “Who Didn’t Want Him Dead?” The front page sparked outrage, amid suggestions that the Post was helping to create a climate of violence against landlords. Brooklyn Borough President Eric Adams and dozens of other local politicians condemned the coverage at a press conference at Brooklyn Borough Hall, and there were calls for a boycott of the tabloid.

Even worse was the deafening silence of our new Mayor. He refused to condemn the hateful cover of the NY Post.

He had made up his mind; To throw the Jewish community under the bus.

But now, our hypocrite mayor has awoken. No, not about Menachem Stark. A man murdered in cold blood and found burned in a dumpster, followed by a hateful NY Post cover wasn’t enough to wake up de Blasio. But the “characterizations of his wife’s comments on motherhood” riled him up.

The Democratic mayor, whose family played a significant role in his election, on Monday called the newspapers’ stories “deeply disturbing” and “offensive” and criticized their “misunderstanding” of the first lady’s remarks.

So let’s understand this, Mr. Mayor.

“Who Didn’t Want Him Dead?” isn’t “deeply disturbing” and “offensive”?!

What are we even talking about here? What was the great catastrophe that caused the Mayor to make his statement?

The mayors wife, Chirlane McCray, told New York magazine in an interview published Sunday that she struggled adjusting to motherhood after the couple’s first child, Chiara, was born.

“I was 40 years old. I had a life,” McCray told the magazine as part of a cover story profile about her outsized role in her husband’s administration. “Especially with Chiara — will we feel guilt forever more? Of course, yes. But the truth is, I could not spend every day with her. I didn’t want to do that. I looked for all kinds of reason not to do it.”

McCray said she loves her daughter but had been working since she was 14.

“It took a long time for me to get into ‘I’m taking care of kids,’ and what that means,” she said.

On Monday, both city tabloids ran stories about the interview and put McCray’s picture on their front pages.

The New York Post ran a screaming headline of “I was a bad mom,” a sentiment that McCray does not express in the magazine piece. The Post’s article says her comments are “bound to horrify most moms.”

So basically, when the mayors family is attacked he goes crazy. But when a man is gruesomely murdered and his body burned and found in a dumpster, and the tabloids publish hateful headlines, he could not care less.