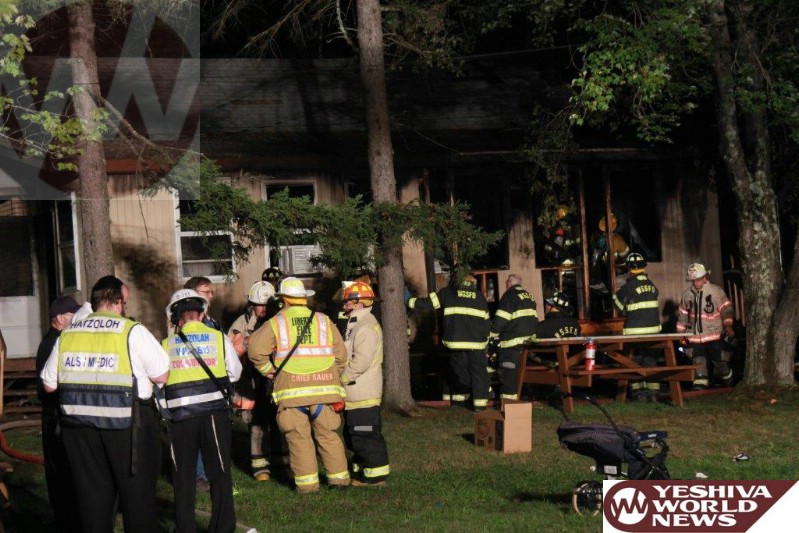 The last 36 hours have been exceptionally trying for the Jewish community as word came of two separate situations, each one of which could qualify as are every parent’s worst nightmare. Almost simultaneously we heard of the horrific blaze that decimated a Sullivan County bungalow and of five teenage boys who were reported missing in Ulster County. In the first case, the results were heartbreaking, as we learned of the death of a three year old in the fatal bungalow fire. In the second instance, the news was positive as all five bochurim were found alive and well early Monday morning. Yet despite the very different outcomes, one common thread ran through both these two instances: the remarkable cooperation and mutual respect that was evident between the various members of law enforcement, the fire department and the numerous volunteers from the Jewish community, especially our heroes, the members of Hatzolah.

There are no words to describe the tragedy that took place Sunday night. Both state troopers and members of Hatzolah tried valiantly to rescue the toddler trapped inside the burning building. As the flames were extinguished by several fire companies who raced to the scene, officials did their best to expedite matters so that a levaya could be held for the young victim less than four hours after the fire began, giving family members a small measure of comfort during their darkest hour. Everyone on hand: fire department volunteers, state troopers, members of two sheriffs’ departments and Hatzolah volunteers worked hand in hand in the face of this terrible catastrophe, each doing their utmost to show inordinate respect to each other and for victims of the devastating blaze.

Collaboration of this magnitude is not something that happens overnight. We remember well how just twenty years ago we would face uphill battles when Hatzolah would arrive to transport a patient to the hospital and how in certain cases, Hatzolah members had their vehicles confiscated when responding to emergency calls. It has taken years of effort, of coordinating meetings between law enforcement and Jewish community leaders, of cultivating relationships with law enforcement and elected officials so that we could all work together to best serve the needs of the Jewish community, particularly during the summer season.

Nowhere in the world will you ever see the incredible cooperation that we witnessed Sunday night, as chaplains, Jewish community members, law enforcement and the fire department all worked in tandem, each one displaying the utmost respect and sensitivity during both the horrific fire and the frightening search for the missing teens. It was a visible reminder that we are fortunate to live in a Medina Shel Chesed, where the religious needs and customs of every citizen are held in high esteem and where all are treated with compassion and kindness. The Sloatsburg Mincha area on the Thruway is one shining example of this exemplary partnership, with law enforcement officials and community leaders working tirelessly together year after year in order to accommodate the religious needs of over 1,000 travelers each week.

Each spring, annual meetings are held between members of law enforcement and Jewish community leaders and organizations such as Hatzolah to continue strengthening this years-old partnership that we has been nurtured so carefully. While the anguish of losing a three year old child is indescribably painful, it is incumbent upon each of us to take the time to recognize the dedication and devotion that we witnessed last night and throughout the summer. We must have hakaros hatov to the elected officials, the state troopers, the volunteer firemen and members of the sheriffs’ offices from many different counties who dedicate themselves to serving the needs of the public and have distinguished themselves by the extraordinary sensitivity they display to members of the Jewish community. We need to take a moment to appreciate the selflessness of the many chaplains and askanim who serve our community and those who volunteer for Hatzolah and the chevra kadisha, who repeatedly give up their sleep, their family time and their vacations, running out at all hours of the day and night when crisis strikes.

It goes without saying that we owe a tremendous debt of gratitude and our heartfelt appreciation to all of these hard working individuals for all that they do. While we all bear the scars of Sunday night’s tragic loss and share in the unfathomable grief at the loss of a young life, let us appreciate that we are indeed blessed to be surrounded by so many dedicated public servants from all walks of life. They are our heroes and our role models, and amidst the fear and the sorrow that we shared during this pair of terrifying events, they emerged as true beacons of light to us all.