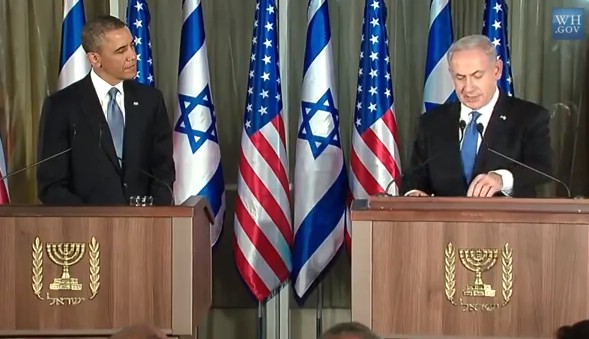 The following is an unedited analysis by the AP on Tuesdays election in Israel:

Benjamin Netanyahu’s apparent reelection puts Israel on a course toward ever deeper confrontation with the world. To govern, his Likud Party would need to depend on ultranationalists — a recipe for neither stability nor bold moves toward Mideast peace.

A period of some horsetrading looms. With Likud as well as rightist and religious allies, Netanyahu still only commands 57 out of 120 parliament seats. He must woo Moshe Kahlon, a relative newcomer to the big leagues of Israeli politics. Breaking away from Netanyahu’s nationalist Likud two years ago after a falling out with the premier, he adopted a vaguely centrist platform and flirted with Isaac Herzog’s more moderate Zionist Union. If he is non-aligned as he claims, then he holds the balance of power between Israel’s traditional right and left blocs, each with just under half of parliament.

It is widely thought that it would be too awkward for the former Likud figure to crown the opposition unless Herzog’s party enjoyed a cushion of several seats over Likud. Polls had suggested that would happen, but the actual vote count on Wednesday showed the opposite: Likud was ahead by 30-24 seats.

If Kahlon does go with Netanyahu, it would give the hard-liner a fourth term that, if completed, would make him Israel’s longest-serving leader, on par with the nation’s founder David Ben Gurion.

That would not bode well for prospects of peace with the Palestinians or a rapprochement between Israel and the region, which seems tantalizingly close in an era in which many of the neighboring Arab nations fear jihadi extremism far more than they oppose Israel.

Under Netanyahu, Israel has deepened its hold on the West Bank, adding Jewish settlers to the point where the territory may soon become inseparable from Israel proper. Combined with the Jews in occupied and annexed east Jerusalem, there are some 600,000 Jews living on occupied land.

In recent days, Netanyahu has said that he would not allow the creation of a Palestinian state if elected. The Palestinians have already said they would take their case against Israel to war crimes tribunals and other international bodies. A campaign to boycott Israel seems poised to gain traction. Netanyahu’s relations with the U.S. administration of President Barack Obama are frosty at best.

Netanyahu knows the complications of all this and may try to draw in Herzog, to give his government a more moderate character. But he has promised, in his final appeals to his base, not to do this — and Herzog would probably demand a rotation in the premier’s post as his price.

Kahlon seems to dislike Netanyahu intensely, and he certainly has the power to crown Herzog, a mild-mannered lawyer and scion of a venerable family of Zionist founders. Kahlon’s platform is moderate, as are top lieutenants in his party, and despite his Likud roots he has supported the idea of peace talks. It is not inconceivable that the left’s desire to unseat Netanyahu extends to offering Kahlon a rotation as prime minister.

The issue has defined Israeli politics ever since the 1967 Middle East war, which cemented Israel as a regional power but saddled it with occupied territories including the Palestinian-populated West Bank and Gaza Strip. Israel withdrew from Gaza in 2005, but to many the territory, run by Hamas militants and blockaded on all side by Israel and Egypt, remains part of the equation.

Parties on the left would trade the land for peace and allow the creation of a Palestinian state. They also argue that the lands are a liability because with their millions of Palestinians their incorporation would destroy Israel as a Jewish-majority state.

The right emphasizes the lands’ strategic value and biblical symbolism and pushes constantly for settling them with Jews. Its success in this endeavor has, paradoxically, put the country on a path toward being a place where Jews are no longer a strong majority.

The issue is Israel’s existential dilemma, central to the world’s interest and fundamental to determining the country’s ultimate character. But after decades of failure and disappointment accompanied by periods of violence, Israelis have despaired of peace and politicians increasingly address the Palestinian matter with evasion, mendacity or doubletalk.

The Zionist Union is a rebranding of Israel’s once venerable Labor Party, which led the country for three decades after its founding but last won an election in 1999. That brought to power its then-leader Ehud Barak, who became the first prime minister to offer the Palestinians a state, on most of the occupied territories. No deal was struck and a violent Palestinian uprising erupted, leaving Labor in shambles ever since.

Meanwhile, the political system has fragmented in ways that align with Israel’s internal divisions. So there are parties for Russian immigrants, Sephardic Jews, different types of religious Jews, secular and progressive citizens, the European-oriented middle class, and a new union of Israeli Arab parties that individually are nationalist, Islamic or socialist.

Only one thing seems certain: Pressure to overhaul the electoral system that has yielded such chaos will grow.