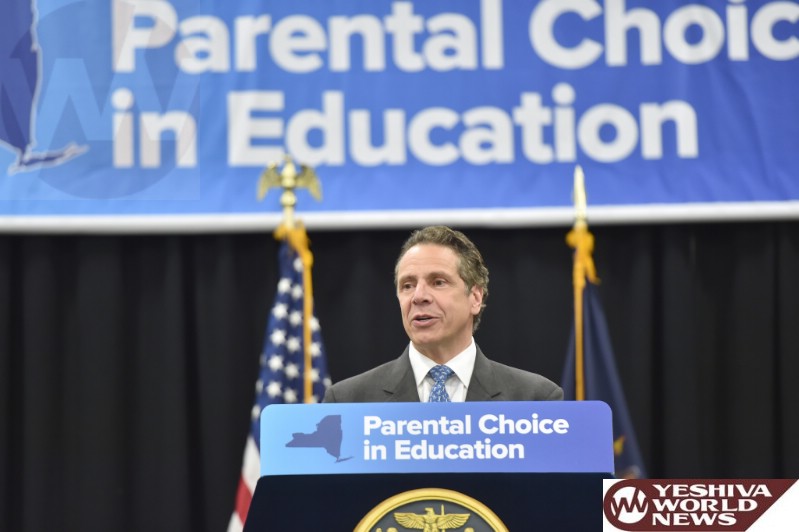 For Democrats who’ve been fighting for education reform, this was a game changer. We now have a standard bearer: A Democratic heavyweight willing to come out with the courage of his convictions in the pursuit of educational justice. All this despite intense opposition from a powerful teachers’ union and members of his own party.

Earlier today I had the privilege of attending an address by Governor Andrew Cuomo at Yeshiva Shaare Torah. I call it a privilege because it’s not everyday that a politician of the Governor’s stature visits my neighborhood. It’s one of the drawbacks of living in an overwhelmingly Democratic district: Your vote is generally taken for granted.

The address was to promote the Governor’s latest initiative: The Parental Choice in Education Act. In short, it’s a modified version of the Education Investment Tax Credit (described more here and here), with an added tuition tax credit for tuition-paying parents.

On the surface, it doesn’t seem like much. These are issues that the governor has advocated for in the past, after all. So why is Cuomo’s new push so important?

To answer that, we need to go two months back in time to the last week of March. The budget season was reaching its climax. Leading up to this, there was a large push from Jewish, Catholic, and education reform groups for the Education Investment Tax Credit.

There was hope that a new Assembly Speaker, one who was an initial sponsor of the tax credit, would step up and allow it to come to a vote (upon which it would surely pass). But those hopes were squashed when the ultra-liberal wing of the party hijacked the agenda and prevented its passage.

With the start of the last half of the session in late-April, there was some hope for the Education Investment Tax Credit, but not much. Then two weeks ago, with the unprecedented upheaval of the Senate leadership, virtually all hope was lost. The pundits all said that the remainder of the legislative session would be fruitless. Albany would just do what it needs to do: Renew some key programs and then go home. Supporters of the Education Investment Tax Credit packed their bags and prepared to fight another day.

But out of nowhere, with no push from Jewish or Catholic groups, Governor Cuomo put forward a version of the tax credit more ambitious than its predecessor.

The premise is simple: The choice of where to send children to school should always remain with the parents, and that choice must be in fact, not just in theory.

The event began with remarks from Sol Werdiger, chairman of Agudath Israel of America. He spoke about the Jewish community’s long-standing relationship with the Governor’s father, the late Governor Mario Cuomo. He then recounted all of the current governor’s help over the years, and how much the community appreciates the Governor’s support, pledging that the community will always remember it.

Councilman Chaim Deutsch, chairman of the NYC Council subcommittee on non-public schools, then spoke about how much easier his fight for support of public school alternatives has become with the Governor’s support. He spoke of his own struggles paying tuition, invoking his many children and grandchild now in yeshivas.

Councilman David Greenfield told the crowd that the Governor’s support for education justice was “in his kishkes.” He spoke of the importance of the Parental Choice Act and how, for the first time in the state, there was a proposal to give direct relief to tuition-paying families.

Assemblyman Dov Hikind, a long-time advocate for the Education Investment tax Credit spoke about how monumental a move this was on the Governor’s part. He pointed out how this was not about pitting public schools against private schools, citing to his own advocacy to increase funding for public education over the years. It was instead, he said, about providing for the 400,000 New York students whose families choose public school alternatives.

Then Governor Cuomo rose to the podium, delivering his remarks with the fervor of a presidential contender and the finesse of a statesman. He spoke of the Jewish tradition of Tzedakah, which although used to mean charity, he pointed out, really means justice. Justice, he said, is what the Parental Choice in Education Act is all about. He stressed the importance of giving parents a real choice, not just a theoretical one. When parents have to deal with a heavy tax burden, adding the cost of tuition—especially for families with more than one child—is not a real choice.

He then turned his attention to the legislature. He reminded the crowd that many politicians have a tendency to talk the talk and make the right speeches, but come up short when it comes to fighting for their constituents and making the important votes. (For one of many examples, see here.) He implored the crowd to put continued pressure of their senators and assemblymen to not only pledge their support, but to demand their actions.

“Tell them that if you want my vote, I want yours. If I don’t get yours, you won’t get mine.”

Cuomo reminded the crowd that politicians are good listeners, because if they stop listening they’re no longer politicians. He urged the audience to call and email and call their legislators again. He pointed people to InvestInEd.org where they can send emails directly to their legislators.

This makes us ask where our legislators stand? We know where Dov Hikind and Simcha Felder stand. We presumably know where Steven Cymbrowitz stands (he was at the event as well). But where does everyone else stand?

Back at the end of budget season, Rodneyse Bichotte released a statement detailing the reasons behind her flip-flop on the Education Investment Tax Credit. Buried in there, she noted that she could not support the bill because it would supposedly only benefit wealthy donors, not tuition-paying families.

The Parental Choice in Education Act provides just that: A tax credit to tuition paying families. Will she change her vote? It’s not too late to repair a fraught relationship with her Jewish constituents.

We know where Speaker Heastie stands. He was an early supporter of the tax credit. Will he let the bill come to a vote, or will he use backroom tactics to block the democratic process and placate his left flank?

Only time will tell, but as the Governor reminded us there’s not much time left. Religious schools across the state are being forced to shutter their doors and turn students to failing public schools because of the increasing financial burden.

The time is ripe to take action. Call your assembly member, email your senator, and remind them that if they want your vote next year, you want theirs this year.

The author is a law student and political activist in Flatbush. He can be reached through davidjrosenberg.com or on Twitter @David4NY.