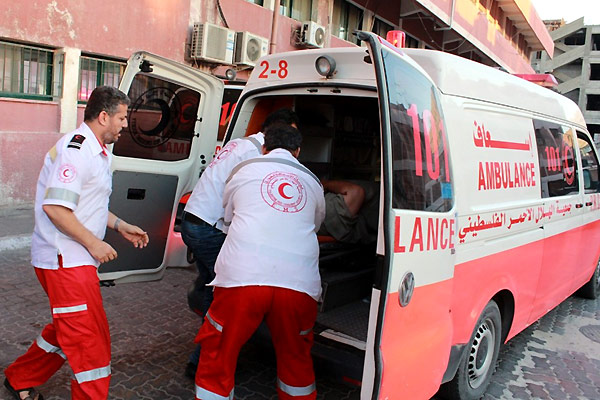 How can this be?

The Litman family were gunned down on the road from Hevron to Meitar on Friday afternoon whilst they were on their way to celebrate the Shabbat Chatan of their new son- in-law to be. Their daughter’s wedding was scheduled for the Tuesday next. Father and son were murdered in cold blood. The son, a Magen David Adom trained responder and volunteer contacted the MDA right before he was mortally wounded. His younger brother, although wounded as well, bravely phoned in again to direct the rescue services. As he was calling MDA, an ambulance passed by.

This ambulance of the Arab Red Crescent (part of the internationally regulated Red Cross organization) slowed down, saw that the dead and wounded were Jews and told them to call MDA at number 101. Might we be grateful that they at least told them whom to call?

I had the honour and privilege of being trained during this same week with a group of Canadian physicians, to be an active member of the Magen David Adom international unit.

On the night shift between Tuesday night and Wednesday morning of the same week before this devastating murder, I was a volunteer doctor on a Magen David Adom ICU ambulance, called the “NATAN”.

At 2 am we were called to attend to a 60 year old man in cardiac arrest in the Old City of Jerusalem. With sirens and lights we quickly arrived at the parking lot of the Jewish Quarter, carried our equipment and jumped on the Kawasaki mule ( a small vehicle equipped with a single stretcher and powerful wheels that enable the old city to be traversed where the ambulance could not manage). The mule was driven by a volunteer first responder who sported a black velvet yarmulke and a long beard of grey and white and flanked by two volunteers, two young Jews one with long payos and the other with a teeshirt with captions.

We drove deeper and deeper into the Muslim quarter, dank, dark and quiet. A lone young Arab man silently awaited us and led us into the street and up the stairs that we had to climb over and under in order to enter his father’s damp, airless one room cave-like abode.

Two Israeli soldiers followed us in and shortly after two Israeli Police officers of Arab descent stood guard while we quickly attended to this poor man.

We did not stop. We looked for clues to understand how this event happened and how we could possibly reverse this horrific process. When there was no further hope of life we stayed on providing support until more family members arrived. We encouraged that family members be called in to offer support even though we didn’t know from where they were coming or for that matter what their disposition towards us would be. It is not good to be alone in such difficult times.

We offered explanations, solace, provided information about the process, asked after their welfare, maintained a respectful posture always, and offered our profound and heartfelt condolences.

We left this home in silence and respect with the knowledge that we had done our best. וברוך הי שעשני כרצונ

Dr. Lisa Goldstein is a Canadian physician practicing in psychiatry and chronic pain. She is the Medical Director of the Richmond Hill Headache Clinic, a director of the Canadian Academy of Pain Management and an assessor for the College of Physicians and Surgeons of Ontario.

Dr. Lisa recently joined the first group of Canadian physicians to be trained by Magen David Adom as part of the International Team. This initiative hopes to develop a core of committed professional volunteers who will be available to offer their medical services in times of exceptional need as well as on a regular basis.