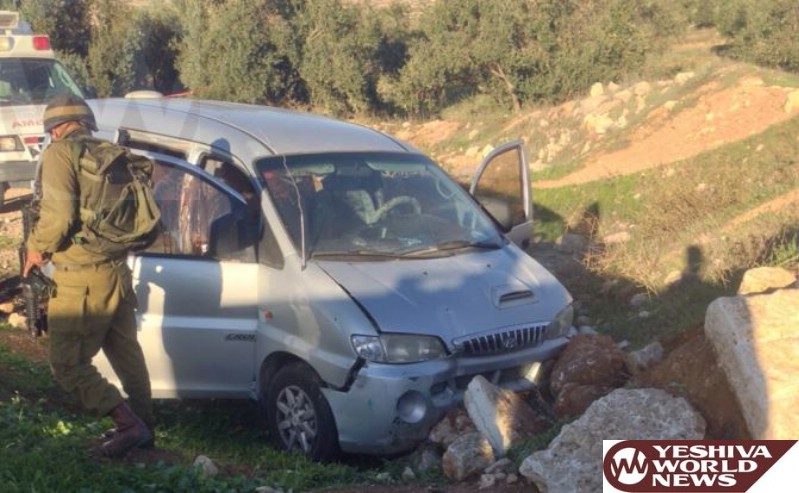 An Israeli man in his 40’s along with his teenage son were shot dead in a terror attack at Otniel Junction, Friday afternoon. Five others were treated for various injuries – including a 16-year-old with gunshot wounds. It appears that he is a son and brother to the victims who were killed.

The fatalities have been identified as Yaakov Litman and his son, Natanel.

The terrorist fled the area in a vehicle. IDF forces are combing the area in search of the attacker.

Hamas released a statement just an hour after the incident, calling the attack “heroic.”

Palestinian media were showing photos of people handing out candy in the streets of Gaza to “celebrate the shooting”.

THE FOLLOWING WERE BREAKING UPDATES AS THE STORY UNFOLDED:

UPDATE 15:27: The area of the attack has been closed down as the terrorists fled the scene. It appears the fatal shots were fired from a passing car.

UPDATE 15:29: It is being confirmed that two persons are dead on the scene. Magen David Adom reports a male in his 40s and a teen about 18 have been murdered in the latest Islamic terror attack.

UPDATE 15:30: B’chasdei Hashem, the three children seated in the rear of the KIA van were uninjured physically in the attack. One person was wounded, and is being transported to Soroka Medical Center in Beersheva.

It appears the terrorists passed a number of vehicles, firing on all of them. MDA reports the youth is 16-years-old and his injuries are non-life-threatening.

UPDATE 15:33: An extremely large IDF force has been deployed and the entire area south of Kiryat Arba has been shut down as the manhunt for the terrorists continues. Authorities believe there were at least two terrorists, a driver and a second who fired the fatal shots.

UPDATE 15:39: Zaka reports volunteers are responding to the scene as it is confirmed two people were murdered in the shooting attack near Otniel.

Yishuv Otniel is located about 20 kilometers (12 miles) past Kiryat Arba in the direction of Beersheva. It is one of a few small yishuvim that make up the S. Hebron Hills community, numbering about 150 families or less.

It is reported the fatalities in this attack are a father and son.

UPDATE 15:42: It is being reported the victims were heading to a ‘Shabbat Kallah’ as their daughter is scheduled to get married on Tuesday, 5 Kislev.

UPDATE 15:43: Hamas is reporting it is responsible for the murderous attack, adding they did not shoot the children in the rear of the minivan for this is contrary to their beliefs. The same propaganda was released following the murder of Rabbi and Mrs. Eitam and Na’ama Henkin, with the terrorist who was apprehending explaining he spared the children in an act of kindness.

Rebitzen Henkin, the mother of Rabbi Eitam has since told the media “if they were really compassionate, they would not have murdered the parents and left the children orphans”.

UPDATE 15:49: A total of five persons have been transported to Soroka Medical Center in Beersheva including two with physical injuries and the others being treated for hysteria. Soroka Hospital officials confirm this, that only two persons have physical injuries, adding their condition is non-life threatening.

The terrorists were traveling in a white Volkswagen Golf.

UPDATE 15:53: MDA EMT-3 Noam Bar was on the scene. He explains ambulances from the Negev district responded, treating a total of seven people. Two were pronounced dead on the scene after lifesaving efforts failed. The others were treated for hysteria including one who was hit with shrapnel.

UPDATE 15:55: Yochai Damari, who heads the S. Hebron Regional Council, tells the media the attack occurred on the main area road, Route 60, which is the road that spans the area from Beersheva to Jerusalem. He explains there was a Red Crescent ambulance in the area when the attack occurred, but the personnel on board preferred not to get out and assist the gravely wounded victims, opting to drive off without doing anything.

UPDATE 15:57: A MDA ambulance passed the area shortly before the attack and called in a “suspicious vehicle”. The attack occurred a short time later. Once again, it is confirmed the Red Crescent ambulance that was there drove off, unwilling to assist the gravely wounded Jews, victims of the latest Islamic terror attack.