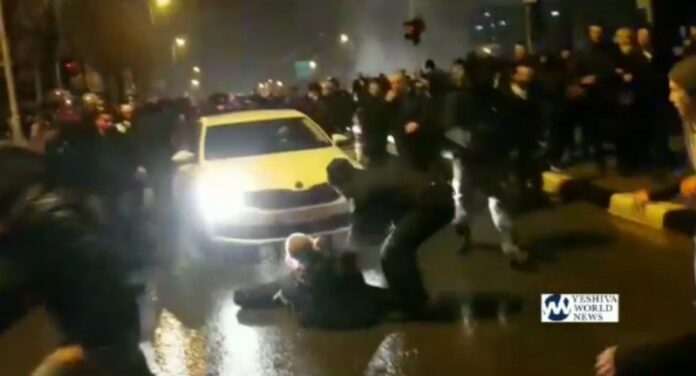 Israel Police raided the Shuva Banim community in Jerusalem early Sunday morning and arrested Rabbi Eliezer Berland and his wife and five other senior figures in the cult-like community on charges of alleged exploitation of sick people and their families as well as money laundering and tax evasion of hundreds of millions of dollars.

The police raided the Shuvu Bunim shul about 5 a.m. and brought Rabbi Berland to his home where they carried out a thorough search with the assistance of dog handlers and then arrested him.

While Berland was being taken to the police car, his followers began rioting and throwing rocks and stones at the policemen, wounding two of them. One of his followers can be heard shouting repeatedly “Harav, kill them! Harav, kill them!” – apparently believing that Berland had the power to kill the policemen through spiritual forces if he wished to. The police were forced to use stun grenades to control the crowd.

As police led Berland to the police vehicle, other policemen surrounded the car to keep his followers from reaching it. Some followers tried to lie down in front of the car, apparently being willing to lay down their life for Berland, and police were forced to pull them out of the way.

On Sunday afternoon, Berland was brought to the Jerusalem Magistrate’s Court for a hearing and his arrest was extended for five days.

Berland claimed during his initial interrogation with the police on Sunday that he only receives “pidyonos” for brachos from people who request it and he accepts only small amounts of money.

The police requested that the court extend Rabbi Berland’s arrest due to suspicion that he may obstruct legal proceedings and may also flee the country like he did in 2012 when allegations against him by multiple women became public.

The judge agreed to extend Rabbi Berland’s arrest. Following the judge’s decision Rabbi Berland was taken to the hospital to undergo medical examinations.

The investigation against the cult was conducted by a special investigative team of the Jerusalem District Police. “Over the last few months, Israel Police have conducted an undercover investigation for suspected crimes of exploitation, fraud and serious tax offenses which are suspected to have been carried out over a number of years by the suspects,” Israel Police stated on Sunday.

According to B’Chadrei Chareidim, one of the complaints filed with the police stated that after Berland had promised the family of a clinically dead man that he will be healed, the family gave him a large sum of money. When the promise failed to be fulfilled, the family sought their money back and Berland responded that the family should give him more money and their relative will be healed. After the patient died, the family against sought their money and Berland told them to give him additional money so their relative will be the first one to arise during techiyas ha’meisim. Multiple people in need of yeshuos were exploited in a similar manner.

“As the investigation progressed, the investigators succeeded in unraveling the suspects’ pattern of actions, which is suspected to have been conducted through a hierarchical system, in which each suspect had a defined role, with everything done under the tutelage and name of the main suspect – in his 80s.”

Police noted that the investigation focused on two areas – the first was criminal offenses, of which evidence and testimonies were gathered against the suspects of receiving tens of thousands of shekels for brachos and promises of healing and other yeshuos. The second was financial crimes, with police investigators uncovering multiple alleged offenses against the suspects, including money laundering, tax evasion and other tax offenses adding up to hundreds of millions of shekels.

In the past, Rabbi Berland was released from house arrest just before Rosh Hashana two years ago, the result of a conviction for assault. Berland pleaded guilty to his actions against multiple victims. he had first fled Israel and traveled from country to country, thus avoiding extradition to Israel, where a warrant for his arrest had been issued. He spent time in the United States, Italy, Switzerland, Morocco, Egypt, Zimbabwe, and Johannesburg before being arrested and extradited to Israel where he faced the law.

Despite the charges and the guilty plea, he continues to be a celebrity-rabbi, as thousands of thousands of people flock to him.