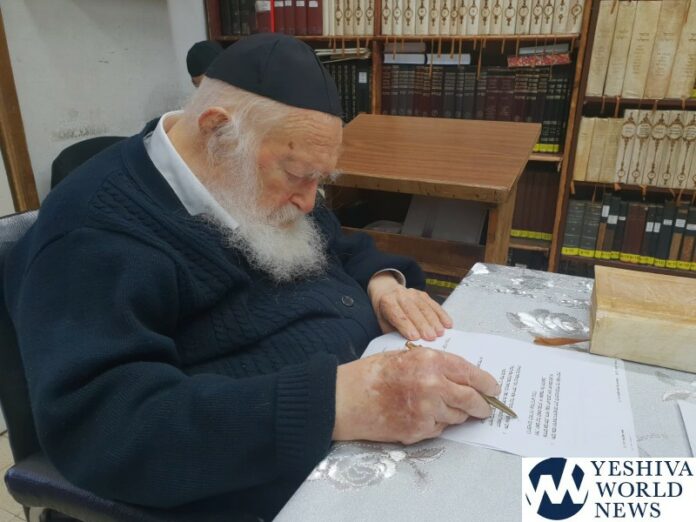 Following a directive that came from Hagaon HaRav Chaim Kanievsky telling Roshei Yeshivos that yeshiva students should stop being tested for coronavirus because it could lead to “mass Bitul Torah”, Coronavirus Commissioner Ronni Gamzu, chastised the Gadol Hador, and said that his words could “endanger the Chareidi public”.

Rav Kanievsky was reportedly worried about the testing causing masses of students to be put in isolation until after Yom Kippur which would cause a massive amount of Bitul Torah.

Recent statistics have shown that there has been a large spike in the number of Chareidim who have contracted the virus, especially in Yeshivos. One Yeshiva in Carmiel had 200 students test positive for the virus on Tuesday.

According to Gamzu, about 28% of infection is in Arab society and 22% in the Chareidi communities across the country. Gamzu also said that 80% of the new cases of infections are in Chareidi cities.

In Beitar Illit alone, 14% of the people tested for Corona in Beitar Illit tested positive, compared to the average for the rest of the country which sits between 8 and 9 percent.

“Without a significant change in the extent of morbidity in the red cities, we will not be able to avoid a full closure,” Gamzu told reporters on Wednesday during a visit to Beitar.

“Unfortunately, we are witnessing a systematic breach of the guidelines. Every evening, events are held in the city that violate all procedures, and yesterday, contrary to our instructions, the educational institutions in the city were opened. I understand the complexity of the situation, but I now state unequivocally: without increasing enforcement and encouraging inspections, we will be required to make complex decisions that may amount to a total lockdown.”

Education Minister Yoav Gallant also seems to be going against the commissioner Gamzu. Gallant, who visited Bnei Brak on Wednesday said that schools must not be shut down in the city.

Binyamin Cohen, Director of the Yeshiva Committee Control Center, told Israeli media that out of around 25,000 yeshiva students in the country, around 500 have been diagnosed with the virus. Other news sites were reporting that as many as 800 students tested positive and thousands more were put into isolation.

Major outbreaks were reported in Elad, Chareidi neighborhoods of Yerushalayim, Rishon Lezion, Bnei Brak, and others.

A few hours after Gamzu chastised Rav Kanievsky, the Chareidi representatives resigned from participating in the Coronavirus Advisory Commitee. Shas representatives claimed that the committee was simply a decoration and had no power or effect. Ashkenazi representatives, Deputy Mayor of Yerushalayim Yossi Deutsch and Head of Ezer M’Tzion Hananya Cholak both resigned as well, and claimed that they were strongly disappointed with the way that the committee was being run and felt that they had no voice in deciding issues that mattered.