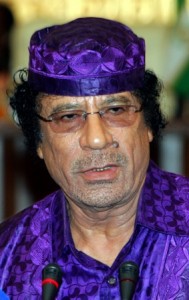 After a morning of heavy fighting near Muammar al-Qaddafi’s compound in Tripoli, the Libyan rebels’ top diplomat in London said that only five percent of the capital city was still controlled by forces loyal to the Libyan leader.

Diplomat Mahmud Nacua says there are “still some pockets” of support for Qaddafi, but rebels are asserting control.

He says they have not yet found Qaddafi but “the fighters will turn over every stone to find him, to arrest him, and to put him in the court.”

Meanwhile, NATO announced that combat air patrols over Libya will continue until all pro-Qaddafi forces surrender.

A NATO official said that Qaddafi must step down immediately in order to save lives and allow for a peaceful transition, but he has still not done so.

The rebels raced into Tripoli Sunday and met little resistance as Qaddafi’s defenders melted away and his 42-year rule rapidly crumbled. The euphoric fighters celebrated with residents of the capital in Green Square, the symbolic heart of the regime.

An Associated Press reporter at the nearby Rixos Hotel where foreign journalists are staying could hear gunfire and loud explosions that have been going on for more than 30 minutes.

Qaddafi’s son, Saif al-Islam Qaddafi, was captured by rebel forces as they overtook the city. Al-Islam faces charges of crimes against humanity at the International Criminal Court in the Netherlands, and the court urged rebels to turn him over, rather than seek revenge.