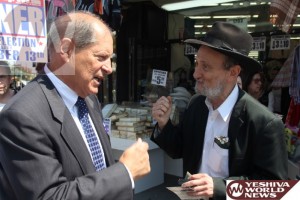 Republican Bob Turner is poised to pull a huge upset in the race to replace Anthony Weiner as the Congressman from New York’s 9th Congressional District. He leads Democrat David Weprin 47-41 with Socialist Workers candidate Christopher Hoeppner at 4% and 7% of voters remaining undecided.

Turner’s winning in a heavily Democratic district for two reasons: a huge lead with independents and a large amount of crossover support. He’s ahead by 32 points at 58-26 with voters unaffiliated with either major party. And he’s winning 29% of the Democratic vote, holding Weprin under 60% with voters of his own party, while losing just 10% of Republican partisans.

If Turner wins on Tuesday it will be largely due to the incredible unpopularity of Barack Obama dragging his party down in the district. Obama won 55% there in 2008 but now has a staggeringly bad 31% approval rating, with 56% of voters disapproving of him.  It’s a given that Republicans don’t like him but more shocking are his 16% approval rating with independents and the fact that he’s below 50% even with Democrats at 46% approving and 38% disapproving. Obama trails Mitt Romney 46-42 in a hypothetical match up in the district and leads Rick Perry only 44-43.

Beyond Obama’s weakness, Turner has actually proven to be a pretty strong candidate.  45% of voters rate him favorably to 30% with a negative opinion.  Independents give him good marks by a 56/17 spread and he has better than normal numbers across party lines with 29% of Democrats expressing a positive view of him to just 43% with an unfavorable one.

Weprin has been much maligned as a candidate but he actually has positive favorability numbers too with 39% of voters rating him positively and 36% negatively.  Over the last few years there have been very few races we polled where a candidate had a postive net favorability spread and still lost.  If Obama’s approval in the district was even 40% Weprin would almost definitely be headed to Congress. He’s getting dragged down by something bigger than himself.

The issue of Israel does appear to be having a major impact on this race.  A plurality of voters- 37%- said that Israel was ‘very important’ in determining their votes. Turner is winning those folks by an amazing 71-22 margin. With everyone who doesn’t say Israel is a very important issue for them Weprin actually leads 52-36. Turner is in fact winning the Jewish vote by a 56-39 margin, very unusual for a Republican candidate.  This seems to be rooted in deep unhappiness with Obama on this issue- only 30% of voters overall approve of how he’s handling Israel to 54% who disapprove and with Jewish voters his approval on Israel is 22% with 68 of voters disapproving. That has a lot to do with why Turner’s in such a strong position.

The only reason this election is being held in the first place is because Anthony Weiner had to resign and voters in the district are very down on him.  Only 29% have a positive opinion of their former Congressman to 53% with a negative one.  That can’t help his party’s prospects for keeping the seat either.

One final note on the poll and what perhaps should concern Democrats most of all. 55% of voters in the district report having voted for Obama in 2008, which is the actual percentage of the vote he got in the district.  Last year a lot of the races Democrats lost were because their voters didn’t show up and the electorate was far more conservative than for a Presidential year.  When you lose that way you can say, well, our voters will come back out in 2012 and we’ll be fine.  But there is no enthusiasm gap here.  Obama voters are showing up in the same numbers they did in 2008.  But only 65% of them are voting Democratic.  That’s a really big cause for concern.