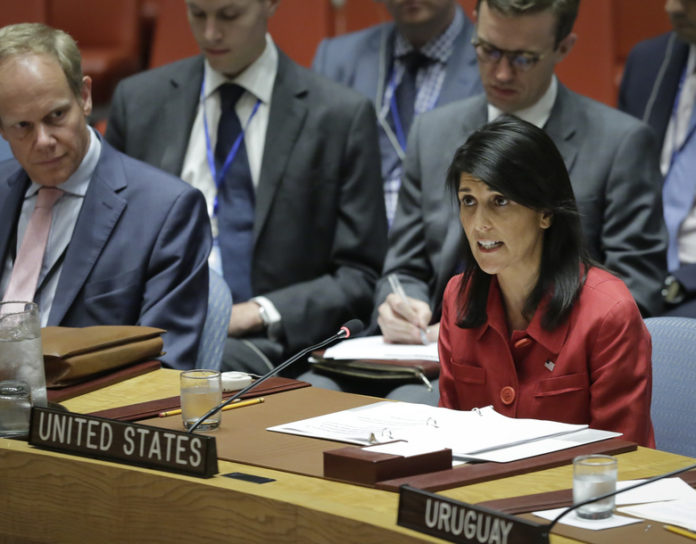 U.S. Ambassador Nikki Haley warned China on Wednesday that it risks its massive trade with the United States if its business with North Korea violates U.N. sanctions.

In a hard-hitting speech at an emergency meeting of the U.N. Security Council following Pyongyang’s successful launch of an intercontinental ballistic missile, she said that “the world has become a more dangerous place” and China has a key role in promoting peace and “preventing a catastrophe.”

Haley said the United States doesn’t seek conflict — “in fact we seek to avoid it.” But she said the launch of an ICBM “is a clear and sharp military escalation” and the U.S. is prepared to use its “considerable military forces” to defend itself and its allies “if we must.”

Haley said she spoke at length to President Donald Trump on Wednesday morning about “countries that are allowing, even encouraging trade with North Korea, in violation of U.N. Security Council resolutions.”

“Such countries would also like to continue their trade arrangements with the United States,” she said. “That’s not going to happen. Our attitude on trade changes when countries do not take international security threats seriously.”

The Security Council has imposed six rounds of increasingly tough sanctions on North Korea to try to rein in its nuclear and ballistic missile programs. Haley said much of the burden of enforcing them rests with China, which is responsible for 90 percent of North Korea’s trade.

Haley said the United States will circulate a new Security Council resolution in the coming days “that raises the international response in a way that is proportionate to North Korea’s escalation.”

She gave no details but said that if the council is united the international community can cut off major sources of currency to North Korea, restrict the flow of oil to their military and weapons programs, increase air and maritime restrictions and hold senior officials accountable.

Haley said previous sanctions have been insufficient to get North Korea to change its “destructive course” and it’s time to do more.

“We will not look exclusively at North Korea,” she said. “We will look at any country that chooses to do business with this outlaw regime. We will not have patience for stalling or talking our way down to a watered-down resolution.”

If the world acts together, she said, “we can rid the world of a great threat — if we fail to act in a serious way there will be a different response.”