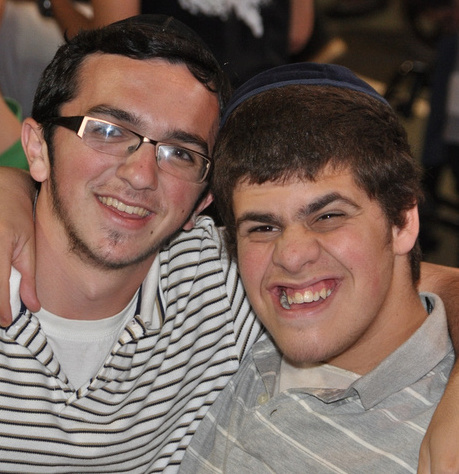 All I could think of when I heard of the commutation was that at last this nightmare would end for Rubashkin’s family, particularly his gentle son Moishe, who suffers from a severe case of autism.

I forged a close relationship with Moishe in the summer of 2010, not long after Rubashkin had been sentenced to prison. That summer, I was privileged to volunteer as a counselor at a camp for children with special needs in upstate New York where Rubashkin’s autistic son Moishe was a camper. It pained me to see the effect Rubashkin’s sentence was having on his son, who was 16 at the time and always respectful, sweet and kind.

When Rubashkin was sent to prison, he left behind a wife and 10 children. I was touched when I saw video of Rubashkin’s wife and children greeting their husband and father as he was released from Otisville Correctional Facility in Iowa after eight years of imprisonment. It especially warmed my heart to see Rubashkin reunited with Moishe, who could be seen on video sitting in the car with his father with a big smile, as they drove out of the facility.

That summer in 2010 when I volunteered at the camp, Moishe would often ask us counselors: “Why can’t I talk to Tati? Where is Tati?” It would break our hearts as we struggled to find the right words to answer his queries. But there were no right words; there was nothing we could say that would fill this void in Moishe’s heart.

“Something has been ripped away from him and he can’t associate his feelings with what’s going on,” Leah Rubashkin said back in 2010 of Moishe’s response to his father’s imprisonment. “It’s been especially rough on him because Sholom has such a strong bond with him.”

For eight years, our legal system did not consider the impact that Rubashkin’s imprisonment had on his family, nor did it seriously consider allegations that there had been a miscarriage of justice, continually rejecting Rubashkin’s appeals.

In June 2010, Rubashkin was sentenced to 27 years in prison after being convicted of financial fraud. For the following eight years, there were bipartisan calls for the case to be revisited and for Rubashkin to be released — or at least for his sentence to be reduced.

Groups like the American Civil Liberties Union, National Association of Criminal Defense Lawyers and Washington Legal Foundation filed amicus briefs supporting Rubashkin’s appeal for a new trial. These groups did not argue that Rubashkin was innocent, but that his trial had not been handled fairly, as the judge had been involved in the initial raid of Rubashkin’s meat-processing plant, which ultimately resulted in the charges against him.

Rather than take these concerns seriously, the government sought to block the court from accepting the briefs. We as citizens of a nation with the greatest legal system on earth, although however imperfect, must work and strive to keep bias and prejudice out of our judicial system.

It seems obvious to me that the judge, Linda Reade, who was possibly involved in the investigation into Rubashkin’s company, had a stake in this. Otherwise, she would not have sentenced the man to 27 years in prison — an excessive sentence for a first-time nonviolent offender. Additionally, she sentenced him to two more years in prison than even the prosecution was requesting.

According to an article in the Washington Post, Orrin Hatch had written a letter, which the White House posted as part of a ream of documents where dozens of members of Congress and 80 former federal judges raised issues about the case, in which he said he was “shocked” by the sentence Rubashkin received and specifically cited the “special bond” between Rubashkin and his autistic son, Moishe.

Thankfully, President Donald Trump actually listened to all of these professionals, elected officials and legal experts. On Dec. 20, Trump vacated Rubashkin’s sentence. This does not vacate Rubashkin’s conviction, but it does allow him to return to his family.

Back at camp in 2010, Moishe would often fret that his father was not around to say the Shema, an important Jewish prayer that the Torah mandates be said twice daily. As counselors, we would say the prayer with Moishe and we were always overjoyed — just as Moishe was — when Rubashkin was able to call from prison and pray with him.

Now, I am elated to know that Moishe and his father can again say the Shema together every night.