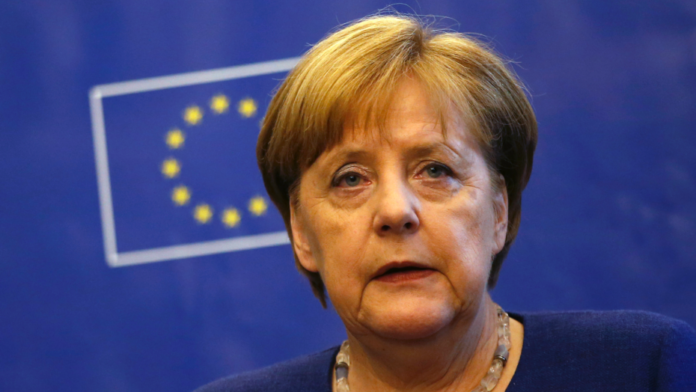 President Donald Trump last week withdrew the U.S. from the 2015 Iran nuclear deal, but European signatories vowed to salvage it. Trump’s move means that Iran is likely to be hit with U.S. sanctions. It is possible they might also have an impact on some European companies doing business with Iran.

Merkel said after EU leaders met in Bulgaria that “all European Union member states still stand by this agreement.”

But she was cautious about possible compensation for companies that do business with Iran. She said that “we can see whether we can give small and medium-sized companies certain relief. That is being examined.”

However, “as for compensating all businesses in a comprehensive way for such measures by the United States of America, I think we cannot and must not create illusions,” she added.

In an effort to keep Iran in the deal, the EU’s executive Commission announced that it will start work on revising a so-called blocking regulation that was drawn up in 1996 in response to the fallout from U.S. sanctions on Cuba, and on Libya and Iran.

The measure has never been used, but in essence it bans companies from respecting American sanctions where those sanctions might damage EU interests, notably trade and the movement of capital.

For the blocking regulation to be used now, it would have to be updated to include U.S. nuclear-related sanctions against Iran. This would take time, and runs the risk that any one of the 28 EU member countries could block the move.

The EU is also ready to allow the European Investment Bank to help companies invest in Iran. On top of that, the EU’s energy commissioner is heading to Tehran for talks on boosting energy cooperation.

French President Emmanuel Macron said his country — along with Germany, one of the EU’s leading economies — won’t get into a trade war against the U.S. over Iran.

Commenting on a decision by French oil and gas group Total to stop a multibillion-dollar project in Iran unless it is granted a waiver by U.S. authorities, Macron said he wants to provide all guarantees for businesses that want to stay in Iran to be able to do so.

But “we’re not going to impose on French businesses to stay in Iran,” he said. “The president of the French Republic is not the CEO of Total.”

Macron said he was convinced that the U.S. decision will benefit Russian and Chinese companies in Iran.