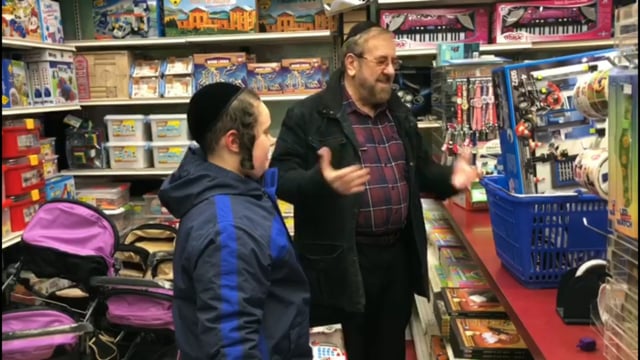 A kind Jewish man has gone out of his way to cheer up a young boy who has the victim of a shocking Anti Semitic attack.

As reported on YWN Sunday night, the 9-year-old boy was walking on Throop Ave. & Walton Street in Williamsburg when the suspect came running up behind him and shoved him to the ground.

The suspect ran off in a gang of 10 thugs, and remains on the loose.

On Tuesday, a man was seen in a local toy store trying to cheer up the boy who wounded and understandably traumatized by the incident.

The man, identified as Manny Krausz from Boro Park, explains to the camera that he does not wants the boy to remain with frightening memory of the attack, and was hoping that by taking him on an all-expenses paid toy shopping spree he would become “happier and stronger”.

Aside for the 2 full baskets of toys, the man also gave the boy, identified only as Shlomo Zalman, a $100 gift card to spend whenever he would like.