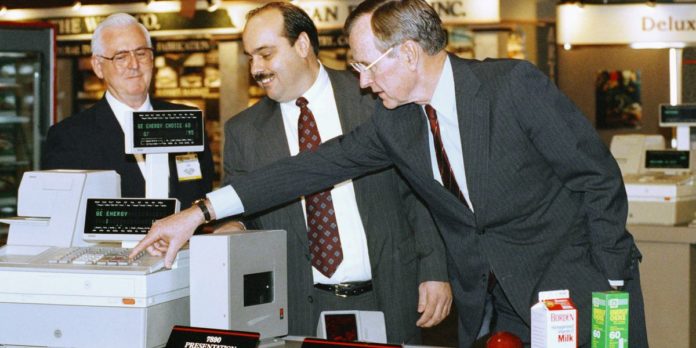 One last time, for the record: It was not an ordinary supermarket scanner.

A February 1992 newspaper story reporting that President George H.W. Bush was baffled by a supermarket barcode scanner when he visited a grocers’ convention in Florida fed into impressions that the president was out of touch, just as he was dealing with a reeling economy and fending off a primary election challenge at the outset of his re-election campaign.

But although Bush had remarked that some of the machine’s features seemed “amazing,” it hardly looked like his first time in a supermarket checkout line. Mostly, Bush seemed to be politely listening to National Cash Register executives making their pitch.

Reporters later learned that it was a special scanner with advanced features, including a scale to weigh produce — uncommon then — and the ability to read barcodes even if they were torn up and jumbled.

Marlin Fitzwater, Bush’s press secretary, devoted four angry pages to the incident in his memoir, “Call the Briefing.” He called the AP story knocking down the Times’ version “the single most courageous story of my White House years.”

But the myth persisted.

WASHINGTON (AP) — It turns out the supermarket scanner that drew President Bush’s attention at a grocers’ convention last week really did have some unusual features.

It can read labels – the so-called universal product codes – that are ripped up and jumbled.

That is apparently what prompted Bush to tell the National Grocers Association in Orlando Feb. 4 he was “amazed” by the technology.

It was widely reported that Bush was surprised to see an ordinary supermarket scanner.

Pundits, columnists and cartoonists seized upon the report as evidence that Bush was out of touch with everyday life after 11 years ensconced in government mansions.

“The whole thing is ludicrous,” Bob Graham, an NCR Corp. systems analyst who showed Bush the scanner, said in a telephone interview from Pleasanton, Calif. “What he was amazed about was the ability of the scanner to take that torn label and reassemble it.”

Press Secretary Marlin Fitzwater said Monday that Bush has “seen those (scanners) many times. This is a story that is totally media-manufactured and maintained.”

Bush had stopped by prearrangement at the NCR exhibit before addressing the grocers. He viewed some other high tech equipment, then walked over to the model checkout stand.

A videotape shot by a White House press pool shows Bush saying, “This is the scanner, the newest scanner?”

“Of course, this looks like a typical scanner you’d see in a grocery store,” Graham replied.

“There’s one big difference,” said Graham, lifting off the scanner’s top plate to reveal a scale underneath. He weighed and rang up a red apple.

The exhibitor had Bush put the machine through its paces before he showed off what he called the machine’s “really quite amazing” new feature.

He had Bush scan a card with a universal product code ripped and jumbled into five pieces. The machine read it and rang up the correct sale.

“Isn’t that something,” the president said.

Later, Bush told the grocers he was “amazed by some of the technology.”

Cartoonists, broadcasters and columnists lampooned the president as a political Rip Van Winkle.

“Fair is fair, and especially since I joined the herd last week and took the occasion to pontificate about how unfortunate it is that we isolate our presidents so much,” said Osgood. The scanner Bush saw “is amazing, and what it does is really something.”