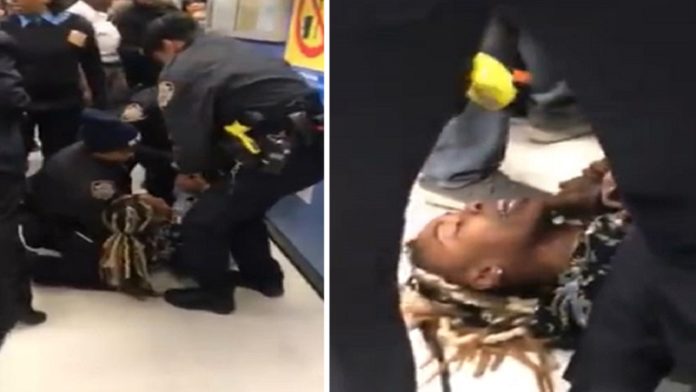 A mother jailed after police violently pulled her toddler son from her arms in a videotaped encounter in the crowded waiting room of a New York City social services office was released Tuesday night.

“I’m just so grateful to everyone and I’m just happy to be free and I just need to see my boy,” Jazmine Headley said following her release from the Rikers Island jail facility.

A judge had ordered her free just hours after Brooklyn District Attorney Eric Gonzalez said that “in the interest of justice” he was dropping all charges against Jazmine Headley in Friday’s incident.

Headley, who was being held on a warrant in an unrelated credit card fraud case in New Jersey, is due to appear in court Wednesday in that matter.

Headley and two other people are accused of making or using a dozen credit cards printed with numbers and names that didn’t match their magnetic strips and having a driver’s license that didn’t belong to them.

In dropping the Brooklyn charges, Gonzalez said he was “horrified by the violence depicted in the video,” which showed officers yanking Headley’s 18-month-old son from her arms. He said the situation should have been handled differently.

“The consequences this young and desperate mother has already suffered as a result of this arrest far outweigh any conduct that may have led to it: she and her baby have been traumatized, she was jailed on an unrelated warrant and may face additional collateral consequences,” Gonzalez said in a statement.

He said that continuing to pursue the charges — obstructing governmental administration, resisting arrest, endangering the welfare of a child and trespassing — “will not serve any purpose and I therefore moved today to dismiss it immediately in the interest of justice.”

The video, posted to social media by an onlooker, caused a furor, spurring outrage from those who say it’s indicative of how social service recipients are treated. It showed Headley ending up lying face-up on the floor, and a police officer at another point pulling her stun gun out and aiming it at the upset crowd.

Officials said the situation is being reviewed by the New York Police Department and the Department of Social Services. Two city employees have been placed on modified duty in connection to the incident.

September 21, 2020 7:47 am
4
A horrific crash on the NY State Thruway took the lives of two young men from Monsey early Monday morning. The two men, identified as...