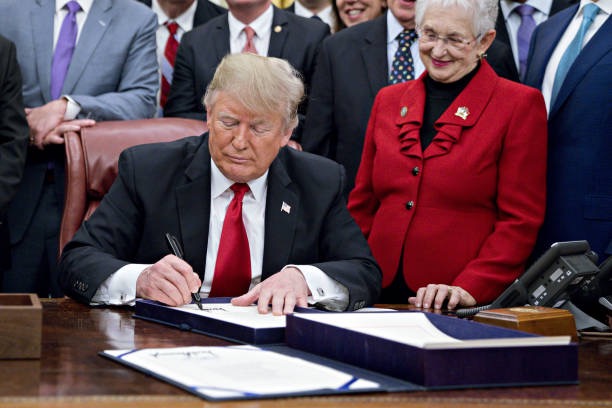 Trump called the bill “an incredible success for our country” and “beyond bipartisan” during an Oval Office signing ceremony.

Lawmakers and advocates also hailed it as a hugely influential package and thanked the president for supporting the issue.

The legislation will give judges more discretion when sentencing some drug offenders and will boost prisoner rehabilitation efforts, among other efforts.

It received the rare support of both Democratic and Republican lawmakers as well as conservative and liberal groups that rarely work together.

Playing a key role behind the scenes was Trump’s son-in-law and senior adviser Jared Kushner, whose father spent time in federal prison when he was younger.

WHAT’S IN THE BILL?

The bill enhances employment and training opportunities so that federal prisoners are better prepared to return to society. It gives judges more discretion when sentencing some drug offenders and eases mandatory minimum sentences.

On the sentencing front, the bill reduces the life sentence for offenders with three convictions, or “three strikes,” to 25 years. It reduces the mandatory minimum sentence for felony drug offenses to 15 years from 20.

Another provision would allow about 2,600 federal prisoners sentenced for crack cocaine offenses before late 2010 the opportunity to petition for a reduced penalty.

The bill also encourages prisoners to participate in programs designed to reduce the risk of recidivism, with the reward being the accumulation of credits that can be used to gain an earlier release to a halfway house or home confinement to finish out their sentence. It prohibits prisoners convicted of a wide range of serious offenses from earning such credits and gaining earlier release.

The measure also seeks to improve various aspects of prison life by requiring prisoners to be placed within 500 driving miles of their home, by banning the shackling of pregnant women and by guaranteeing free access to feminine hygiene products.

WATCH: Askonim celebrating in front of the U.S. Capitol following the Senate voting overwhelmingly (87-12) in favor of a landmark Criminal Justice Reform bill. The House is expected to approve the bill in a vote later this week FULL STORY ON WWW.THEYESHIVAWORLD.COM

WHAT’S NOT IN THE BILL?

Many advocacy groups wanted the changes easing the severity of mandatory minimum sentences to apply retroactively. That would mean a prisoner sentenced to life in prison under the “three strikes” rule could petition for the 25-year minimum that would be established under the legislation.

But to get the backing of law enforcement groups, supporters agreed to make the changes apply to future offenders, with the one exception being the prisoners sentenced for crack cocaine offenses before late 2010. The National Fraternal Order of Police has held the position that making sentencing changes for drug traffickers retroactive sends a message that the justice system is not serious about keeping drug dealers out of communities. Its backing of the bill was viewed as a major breakthrough by sponsors.

WHO SUPPORTED THE BILL AND WHO DIDN’T?

A wide range of conservative and liberal groups backed it. The Faith and Freedom Coalition, which advocates for social conservatives, supported the bill. It also got support from FreedomWorks, which is widely associated with the tea party movement, and the Heritage Foundation, an influential conservative think tank. On the left, the American Civil Liberties Union lobbied for the legislation, as did the Leadership Conference on Civil and Human Rights.

ARE ALL PRISONERS AFFECTED?

The bill applies only to federal prisons, which house about 180,000 prisoners. That’s fewer than 10 percent of all the inmates in the United States.

President Barack Obama was the first president to visit a federal prison while in office and sought to make criminal justice reform part of his legacy. He succeeded in making some changes to the criminal justice system with 2010 legislation that reduced the disparities between mandatory crack and powder cocaine sentences. But more expansive efforts faltered despite having significant bipartisan support.

Indeed, many of the features of the First Step Act that passed the Senate on Tuesday were part of legislation introduced by Sen. Chuck Grassley, R-Iowa, in 2015.

The 2015 bill passed overwhelmingly in the Senate Judiciary Committee, but stalled without getting a vote on the floor, with some Republicans adamantly opposed and a presidential election looming. Politics also played a part. “The Republicans here simply didn’t want to give Obama a win,” said Jesselyn McCurdy, a deputy director at the American Civil Liberties Union.

President Donald Trump’s support for the bill altered the political dynamic, according to longtime Republican and Democratic supporters of criminal justice reform.

“We were stuck. Then came a breakthrough I never expected: the election of Donald Trump as president,” said Sen. Dick Durbin, D-Ill.

Trump’s support gave political cover to wavering Republicans, with Sen. Tim Scott, R-S.C., describing Trump’s efforts as “the only way to get the Republicans to the table, to start the conversation.”

Trump’s son-in-law, Jared Kushner, also was credited with winning support for the bill. Durbin said Kushner “has a passion for prison reform” and “he wasted no time getting involved and engaged in the effort.”