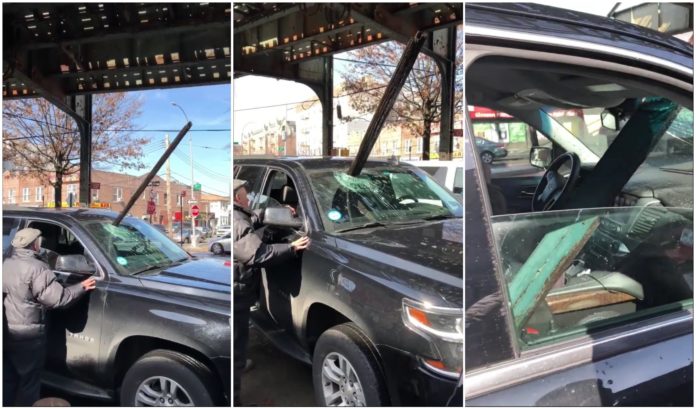 A man in Queens is lucky to be alive after a piece of wood fell from an elevated subway platform and pierced his windshield Thursday afternoon.

Investigators say a wooden plank from the elevated 7 train platform came crashing down on an SUV travelling near 65th Street and Roosevelt Ave at around 1:00PM.

Pictures and video posted on social media showed a horrific scene where death was certainly a possibility.

The piece of debris could be seen sticking out through the windshield of the SUV operated by Mahboob Lodhi, an Uber driver.

Emergency Medical Technicians and MTA personnel responded to the scene but luckily, the driver was unharmed.

“There must be an immediate investigation into how something this dangerous could happen,” City Councilman Van Bramer tweeted. “MTA must answer for our crumbling subway infrastructure before a tragedy occurs.”

The MTA says says it appears the wood fell from a supply platform installed under the tracks years ago. Late Thursday, workers could be seen dismantling the wood beams that were rotted out with nails sticking out of them before inspecting that area with flashlights.

Whether the wood was forgotten about after being placed there was one of several questions the MTA couldn’t answer. The agency said they will be launching an investigation into what exactly happened on Thursday.

Crazy stuff. Livery driver Mahboob Lodhi took this video moments after this huge wooden beam crashed into his windshield and nearly killed him. The plank plummeted from the platform of the 7 train in Woodside, Queens. @CBSNewYork pic.twitter.com/itsamsEJ1l

Keep your eyes on the black SUV – watch the wooden beam fall from the platform of the 7 train in Queens. Crazy scary. Pierced the windshield and almost hit the driver. You’ll hear from him at 11 on @CBSNewYork pic.twitter.com/b0nIR0mgZI

A track from the 7 train just crashed down upon a driving car around 65th Street in Woodside, piercing through the windshield. These photos are horrifying! pic.twitter.com/fBjxItlK7Q

It appears that this is not a "track," but a wooden beam or other debris from the 7 train. Regardless, someone could have died.