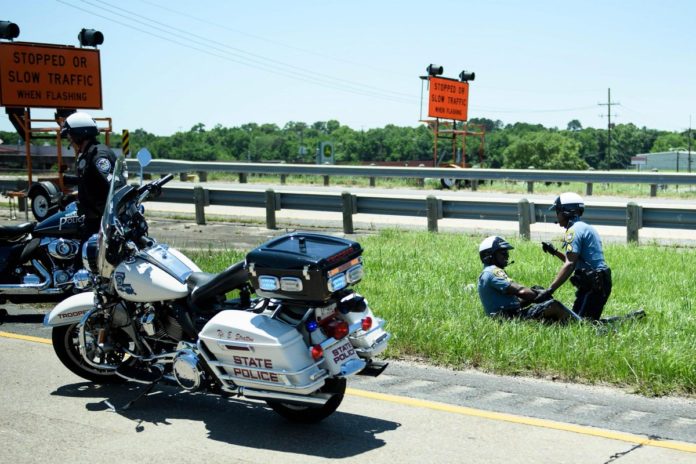 Police officers escorting President Donald Trump’s motorcade in Louisiana have been involved in an accident.

Four motorcycle police officers crashed at 1:30PM on Interstate 10 as the Trump motorcade departed Chennault International Airport in Lake Charles, Louisiana, according to the Secret Service.

The motorcade slowed as it passed the scene. Trump’s armored limousine was not affected.

Three of the four officers were taken to a local hospital to be treated for minor injuries and are in stable condition, White House press secretary Sarah Sanders said.

A reporter following the president’s motorcade tweeted she saw “3 officers down on Interstate 10 near Lake Charles as Trump motorcade headed to Hackberry.” She wrote she saw “One in grassy ditch, sitting up. One flat on his back on highway shoulder, bleeding. A third standing up, bleeding from his arm.”

The President’s motorcade continued on to the Cameron LNG Export Terminal in Hackberry, where Trump toured the facility. Later, he gave a speech promoting U.S. energy policy, infrastructure and economic growth.

.@realDonaldTrump is greeted by Lieutenant Governor Billy Nungesser who was wearing "Trump Socks" as he arrives at the Chennault International Airport Lake Charles, LA. pic.twitter.com/DCTGtnz1VO

Breaking: Trump’s vehicle is fine, but some officers who are part of his motorcade crashed. We could see at least a couple officers on ground and injured. pic.twitter.com/d1bJ5WO4az

The law enforcement official we saw on his back on the ground from the motorcade crash in Louisiana is in surgery for serious injuries to his arm, and lost some teeth, an officer here at the Sempra plant told me. pic.twitter.com/fyC22E86tB

All 3 local law enforcement officers who crashed while escorting Trump motorcade in Louisiana “being treated for injuries at a nearby hospital and are in stable condition," Sarah Huckabee Sanders said.

(Their colleagues are back on their motorcycles, taking us back to airport.) pic.twitter.com/CZAcFMs8nP