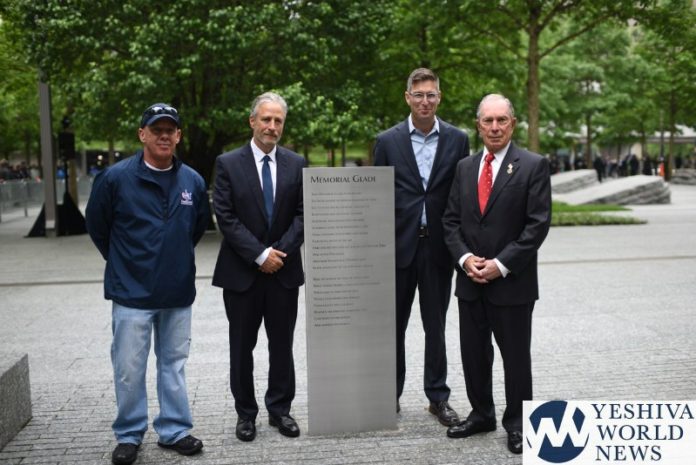 Family members of recovery workers who died after digging through smoldering ruins joined city officials Thursday at a dedication ceremony for a new section of the Sept. 11 memorial at the World Trade Center in lower Manhattan. They were joined by recovery workers who themselves are ill.

The 9/11 Memorial Glade honors rescue and recovery workers who were sickened or died after responding to the Sept. 11 attacks.

The grassy clearing on the southwest corner of the 8-acre (3-hectare) plaza includes a path flanked with six huge, sloping stone structures made of granite slabs inlaid with steel recovered from the fallen trade center towers.

For months after 9/11, countless heroes worked around the clock in dangerous conditions to allow our city to rebuild. Today, the 17th anniversary of the end of recovery efforts, we dedicate this Memorial Glade to all who became ill or died from causes related to the 9/11 attacks. pic.twitter.com/c5djnDSkHp

“Today we are dedicating this memorial glade to all who became sick or died because of causes related to the attacks and to all the men and women who took part in the rescue and recovery effort that ended on this date 17 years ago,” former Mayor Michael Bloomberg, the chairman of the National September 11 Memorial and Museum, told the hundreds gathered on the plaza for the ceremony.

“We have a duty to care for those who need it and to honor the memory of those who died. The memorial glade helps us to fulfill that duty,” he said.

Caryn Pfeifer, whose husband, firefighter Ray Pfeifer, was an advocate for trade center responders before he died of cancer in 2017, called the memorial glade “a beautiful place for our heroes.”

Pfeifer said that after the 2001 terrorist attacks, her husband “spent the next nine months searching and digging at ground zero without being asked, without being told, and without thinking about the consequences. But there were consequences. There was illness and pain and death and for Ray that meant his guys and their families were in trouble.”

After the ceremony, attendees placed flowers and Mass cards on the stone slabs.

Freyda Markow, who said she volunteered at the trade center site with the Salvation Army and the Red Cross, wore photos of firefighters who died years after responding to the attacks around her neck.

Thousands of rescue and recovery workers and many city residents were exposed to the clouds of thick dust released when the trade center’s twin towers collapsed.

Many spent weeks working without proper respiratory protection as fires continued to burn and later developed respiratory and digestive-system ailments potentially linked to inhaled and swallowed dust. Over the years, more have been diagnosed with other illnesses including cancer.

Researchers continue to study whether there is a link between those illnesses and toxins present during the cleanup. One study published last year found that overall mortality rates among rescue and recovery workers haven’t been elevated. But researchers have raised concern about an unusual number of suicides among first responders and more deaths than expected from brain cancers and non-Hodgkin’s lymphoma.

About 50,000 people have applied so far to the federal fund for those with illnesses possibly related to being at the site. More than $5.1 billion in benefits have been awarded.

The compensation program is set to expire at the end of 2020 unless it is renewed by Congress.