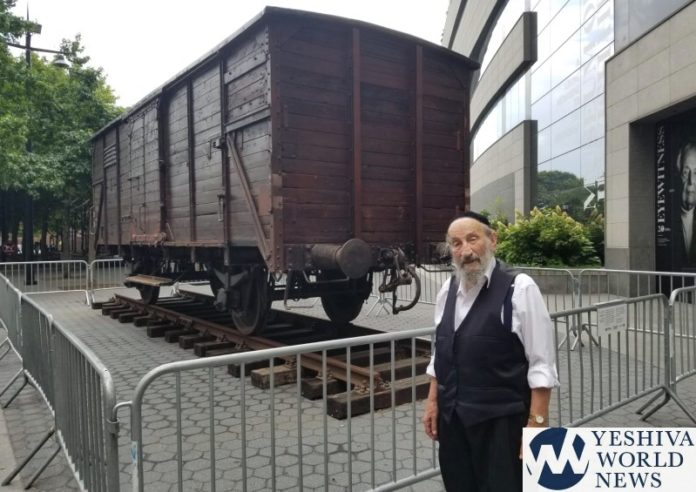 An elderly Holocaust survivor delivered a short but moving few words while standing in front of the vintage German train car – currently on display in NYC – used to transport men, women and children to Auschwitz and other Nazi death camps.

Reb Leibish (Lipot) Rubinstein was outside Manhattan’s Museum of Jewish Heritage, where the car is on display. Reb Leibish is a Pupa Talmid and Pupa Chosid, yet from the Vayaged Yaakov of Pupa, to the Vayechi Yosef to the current Rebbe.

It was a moving experience for Rubinstein, as he stood in front of the cattle car which he says were stuffed with 80-100 people, starved of food and water before they arrived at Auschwitz, where most of them were killed HY”D.

Rubinstein comes from Makov Hungary, where he relates that his entire family was taken to Auschwitz – his parents and five brothers and two sisters – where they were all murdered.

Among his children is legendary photographer Mr. Heshy Rubinstein of Boro Park.

The windowless boxcar is among 700 Holocaust artifacts, most never before seen in the United States, which were prepared for one of the largest exhibits ever on Auschwitz – a once ordinary Polish town called Oswiecim that the Nazis occupied and transformed into a human monstrosity.

The New York exhibit opened on May 8, the day in 1945 when Germany surrendered and the camps were liberated.

German-made freight wagons like the one in the exhibit were used to deport people from their homes all around Europe. About 1 million Jews and nearly 100,000 others were gassed, shot, hanged or starved in Auschwitz out of a total of 6 million who perished in the Holocaust.

That fate awaited them after a long ride on the kind of train car that’s the centerpiece of the New York exhibit.

On display are concrete posts from an Auschwitz fence covered in barbed and electrified wires; a gas mask used by the SS; a desk belonging to Auschwitz commandant Rudolf Hoss; and a dagger and helmet used by Heinrich Himmler, the chief architect of Hitler’s “final solution.”

The collection of prisoners’ personal items includes a comb improvised from scrap metal; a trumpet one survivor used to save his life by entertaining his captors; and tickets for passage on the St. Louis, a ship of refugees whom the United States refused to accept, sending them back to Europe where some were killed by the Nazis.

The materials are on loan from about 20 institutions worldwide, plus private collections, curated by Robert Jan van Pelt, a leading Auschwitz authority, and other experts in conjunction with the Auschwitz-Birkenau State Museum in Poland and Musealia, a Spanish company that organizes traveling shows.

The New York one will run through Jan. 3.