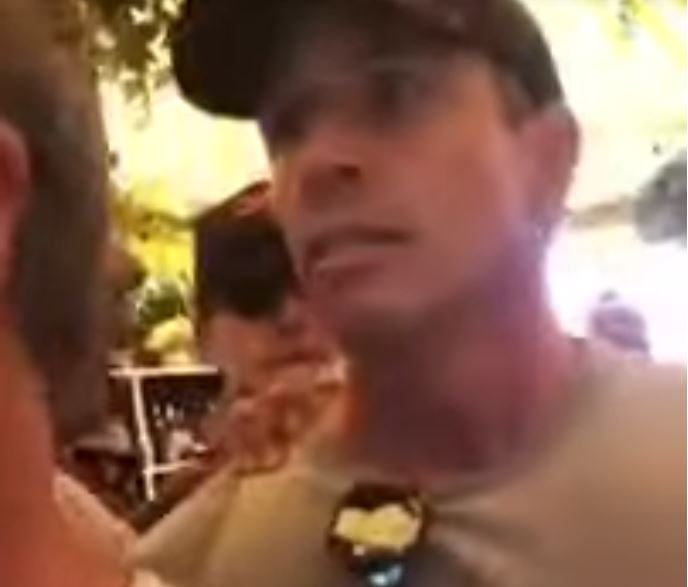 (By Rabbi Yair Hoffman For 5TJT)

Before we get to the four point halachic analysis – let’s review what happened.

The incident occurred and was filmed on last Sunday on Shelter Island when Governor Cuomo’s brother, 49, an anchor on CNN, was taking his family out to dinner.

Apparently, a man sent Chris Cuomo into a rage after he called the anchor “Fredo” – a reference to Fredo Corleone, the nebechel son of Don Vito Corleone in the 1970’s movie series – “The Godfather.”

“Punk- (expletive deleted… expletive deleted) from the right call me ‘Fredo.’ My name is Chris Cuomo, I’m an anchor on CNN. Fredo is from ‘The Godfather,’ he was a weak brother and the use of it to an Italian is disparaging.”

He further explained that the name “Fredo” is as offensive to Italian Americans as the N-word is to African Americans.

The man in the video responded [possibly sarcastically] that he believed the anchor’s real name was Fredo.

The four points that are to be addressed in this article are: The halachic aspects of racism, cursing, threatening to harm someone, and the need for anger management.

From a Torah perspective, racism in all forms is inherently wrong and immoral. There are a number of reasons for this.

This author recalls Rav Yisroel Belsky zt”l being asked this question at a Q&A session in Camp Agudah. Rav Belsky explained that all people were created B’Tzelem Elokim, in Hashem’s image. He cited Pirkei Avos where Rabbi Akiva taught: Beloved is man, for he was created in the image; an even greater expression of love is that it was made known to him that he was created in the image [of Hashem, as it is stated: “For in the image of Hashem He made man.” Every person has a Divine dignity to them.

The great Roshei Yeshiva explained that the Nazis, yimach shemam, had lost their tzelem elokim because of the depraved murderous acts that they had done. The implication is that others, all others, have and retain their tzelem elokim.

Rav Chaim Dovid HaLevi in his Assei lecha Rav (Vol. VIII #68) decries the notion of racism and describes Torah hashkafa as being entirely free from it. In respona #69 he cites the Rambam’s Iggeres Teiman indicating that the sole distinction between Klal Yisroel and other nations is that we agreed to keep the Torah.

Use of a pejorative term to describe an entire group of people is also a violation of hamechaneh shem ra l’chaveiro. The Gemara in Bava Metzia (58b) states that all the people who descend to Gehinnom arise from there with the exception of three kinds: adulterers; those who affix a pejorative name to another; and one who embarrasses his friend in public. These three never arise. This halachah is stated in Shulchan Aruch (Choshen Mishpat 228:5) and is nogaya. In this case it would be even worse because he is hitting an entire group of people.

The Rambam (Hilchos Teshuvah 3:14) lists this as one of the 24 categories of people that have no share in the World to Come.

Another issue in this particular case is called “miskabed b’kalon chaveiro,” receiving honor through the embarrassment of another. The Midrash Rabbah (Bereishis 1:5) quotes Rabbi Yossi bar Rabi Chanina that whosoever receives honor through the embarrassment of another has no share in the World to Come. It is also cited in the Talmud Yerushalmi (Chagigah 2:1).

We find throughout halacha the notion of kavod habrios – human dignity. Nowhere is this defined exclusively as Jewish dignity or white dignity like those mitzvos of amisecha vrchulay. All of mankind is endowed with it.

A fascinating thought is presented by Rav Aharon Soloveitchik from the Talmud Yerushalmi in Bava Metzia (2:5). There, Rabbi Shimon ben Shetach returned a pearl to an Arab idol-worshipper, after the pearl was discovered on the donkey he had purchase from the Arab. Although it would not technically be considered stealing, Rabbi Shimon ben Shetach responded, “Did you take me for a barbarian? Shimon Ben Shetach would rather hear the G-d of the Jews praised than all the money of this world.”

The use of the term “barbarian” intrigues Rav Soloveitchik. He explains that it means anyone who would treat an outsider or an “other” in a manner that is different than the in group. It is a Kiddush Hashem, a sanctification of Hashem’s Name when the Arab idol-worshipper sees others treated in the same manner.

Thus the person who called Mr. Cuomo “Fredo” was wrong from a halachic perspective.

The Gemara in Pesachim 3a cite Rabbi Yehoshua ben Levi: A person should never allow an unseemly word to come out of his mouth, for the Torah went eight letters out of its way to avoid writing something unseemly (Bereishis 7:8). The Torah states “min ha’beheima asher einena tehorah” — from the animal that is not pure” instead of just saying, “Ha’beheimah ha’temei’ah — the animal that is impure.” Many extra words are used by the Torah to teach us this important lesson — not to sully our neshamos by cursing.

The Midrash attests to this on the verse in Devarim (23:10), “When you go out to war, guard yourself from every evil matter.” How does the Midrash (Vayikra Rabbah 24:7) define evil matter? You guessed it — “unseemly words,” referred to in Hebrew as nivul peh.

The Midrash seems to indicate that it is a Biblical prohibition whether in war or not in war — it is just that it is more common in wartime or in the soldier’s barracks rather than in the typical social structure or setting to which the Torah generally speaks. The Machzor Vitri (424), one of the foremost students of Rashi, writes that the prohibition is Biblical.

And it seems that it is not just an innocuous, harmless little activity. The Gemara in Shabbos (33a) tells us that because of the sin of verbal cursing, great problems come. Harsh decrees are promulgated, the youth die young, orphans and widows cry out and are not answered. In other words, the repercussions are rather serious. The Shelah (Osios Shin Shtika 24) writes that cursing is the avi avos ha’tumah — the ultimate source of impurity.

The human soul reflects the Divine aspects of mankind. In contrast, cursing reflects the nefesh ha’beheimis, the animalistic aspect of mankind. Interestingly, scientists believe that there is also cursing in the animal kingdom. Frans de Waal, a professor of primate behavior at Emory University in Atlanta, explains that when chimpanzees are angry “they will grunt or spit or make an abrupt, upsweeping gesture that, if a human were to do it, you’d recognize it as aggressive.”

Such behaviors are threats, and can be interpreted as a form of cursing.

The bottom line is that cursing emanates from and reflects the lowliest aspects of human behavior.

The reason cursing is called “avi avos ha’tumah by the Shelah HaKadosh is that such activity undermines holiness, both of oneself and of others. The Gemara in Kesuvos (5b) instructs the others just how they should react. The Gemara states that fingers were created like straight tent pegs for a reason — so that someone who hears nivul peh can place his fingers in his ears to blot out the sound.

It also reduces our pre-designated life spans. The Gemara in Niddah (16b) states that even if one had a lifespan of 70 years, nivul peh can turn it around in the wink of an eye.

Surprisingly enough, however, the Taz (Y.D. 124:1) states that the reason the Gemara uses the wording “one who removes curse words from his mouth,” rather than “one who issues curse words from his mouth” is to show us that the prohibition is only when one does so intentionally and willfully. Otherwise, it may not be the most proper thing, but it does not violate the Biblical prohibition.  Perhaps Mr. Cuomo could not help himself on this one – and thus he can rely on this TaZ.

It is interesting to note that philosophers are sometimes at a loss in defining why exactly cursing is wrong. From a Torah perspective, the issue is impurity. Man was created in the Divine Image and possesses a cheilek Elokah mi’ma’al — a Divine section from Above. Cursing and the uttering of profane words darkens and sullies that Divine section from Above that we all possess.

In Shmos 2:13 Moshe Rabbeinu encounters someone raising his hand against another and says, “Rasha, lama sakeh rei’acha, Wicked man—why do you strike your friend?” Rashi points out (based on the Gemorah in Sanhedrin 58b)  that he is called a Rasha – even though he did not actually strike the other.  We see from here that it is wrong to threaten – even if one does not actually do it.  It is so wrong that he is called an evil-doer – a wicked man.   The language of the Gemorah is that one who raises his hand against another.  But does it include just threatening via words?  Some of the Meforshim do draw this distinction.  Here, however, in the video tape – it seems that Mr. Cuomo did initiate physical actions that looked like he was going to actually strike the person.

Pretty much everyone can see that Mr. Cuomo’s reaction requires some serious anger management.  In secular circles, it is thought that anger-management programs first originated in the 1970s by clinical psychologist Dr. Raymond Novaco, a professor at the University of California at Irvine. Interestingly, Rav Moshe Levinson, zt’l, the grandfather of Rav Elyashiv, zt’l, developed an anger-management program well before that.

In 1910, Rav Levinson printed his highly developed anger-management program in a sefer titled “M’aneh Rach.” It was published in Piotrków Trybunalski, in Congress Poland, then a puppet state of the Czarist Russian Empire. It was Rav Levinson’s third sefer.

Background To The Sefer

The sefer had a haskamah from the Ridbaz, the av beis din of Slutzk. The Ridbaz, however, left to America and then to Eretz Yisrael in 1900, so Rav Levinson must have been working on it for a while and probably finished it well before 1900.

The M’aneh Rach was carefully analyzed in a remarkable book titled “Fundamentals of Jewish Conflict Resolution”, by Dr. Howard Kaminsky. Rav Levinson states that there is nothing particularly new in his program; rather, he gathered together all the rabbinic statements that pertain to anger and he explains them. He also organizes and arranges them in such a manner that they constitute a genuine program. In addition, Rav Levinson provides advice, strategies, and suggestions.

Rav Levinson writes that if someone reviews his work two or three times, he should be able to conquer anger. He writes that the fact that the points are all gathered together and explained will provide the person with much greater clarity on the matter. He will thus be able to surmount the impediments to overcoming an anger problem.

Dr. Kaminsky points out that a source that Rav Levinson used in his M’aneh Rach is the Reishis Chochmah by Rav Eliyahu de Vidas. He lived in the 1500s, some 400 years before Rav Levinson.

So what does Rav Levinson advise?

Rav Levinson places an extraordinary emphasis on the notion of metinus, deliberation, the idea of slowing down our reactions to provocations. It is a theme that he stresses time and again.

The world around us is filled with moral decline.  It is this author’s view that we should use what happens in the world as teaching moments – both for ourselves and for our children.  There are four teaching moments that can be derived from this incident. The first is that racism is wrong.  The second is that cursing is horrific.  The third is that we should avoid all forms of threats.  And the fourth is the need for anger management. We should spend time learning them and applying their lessons to our own lives.