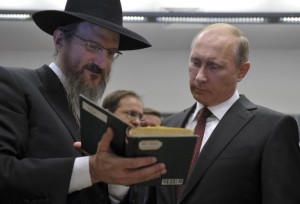 Russia’s Chief Rabbi Berel Lazar on Friday night walked 30km (18 miles) from the airport to his home because his flight arrived 10 minutes before Shabbos. He arrived home at 6:00am Shabbos morning and quickly prepared himself to go to shul.

The story begins with a ceremony he attended in Belgorod, Russia on Friday marking the 70th anniversary of the major battle against the Nazis. Also present was Russian President Vladimir Putin and cabinet ministers. The chief rabbi was invited by the president and while Rabbi Lazar tried to get out of attending because of candle lighting considerations, he attended after receiving a promise that he will be home well ahead of Shabbos. Kremlin officials promised the rav his flight would leave two hours before candle lighting, realizing the flight time is only one hour.

Due to the fighter jets operating in the area where his plane was set to take off, planes had to wait a period of time between departures, leading to the delay. The rav asked to disembark, preferring to remain for Shabbos but he was told that since the plane was on the runway this was impossible. Hence, he arrived at the airport 10 minutes before candle lighting and he simply walked.

Cabinet ministers saw the rabbi send the guards and driver off, realizing he was beginning the long walk. They offered him a ride, but he politely refused. “Come and get in. Come quickly and no one will see” they are quoted saying to him.

The rav arrived home early morning, made Kiddush and ate something and headed for Shachris. He went to mikve on the way to shul in line with his minhag and davened with the tzibur and delivered his drasha as expected.