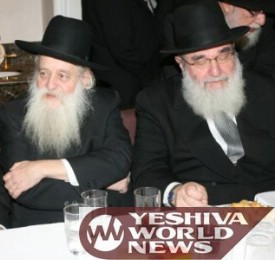 The Eternal Jewish Family (EJF) announces today that Rav Elya Ber Wachtfogel, the Rosh Yeshiva of Yeshiva Zichron Moshe in South Fallsburg and one of the leading Gedolei Hatorah internationally, has agreed to assume the position of Chairman of the Rabbinic Committee of the Eternal Jewish Family following an announcement that Rav Leib Tropper has resigned that position effective December 12, 2009. Rav Wachtfogel joins a distinguished board of rabbinic and halachic authorities who oversee the activities of EJF, headed by Rav Reuven Feinstein, Chairman of the Halachic Committee (US), Dayan Chanoch Ehrentreu (Europe) and Rav Shmuel Eliezer Stern (Av Bais Din of Rabbi Wosner’s Bais Din – Israel).

EJF also announced that Rabbi Chaim Blum, EJF’s liaison to the network of Botei Din in the Torah community, has agreed to serve as interim director of EJF. The organization operates offices in the US, Europe and Israel with international headquarters in Monsey NY. In accepting the position, Rabbi Blum said: “The recent announcement by Rav Tropper that he is resigning his post at EJF is accepted with sadness and regret but we appreciate the years of dedication and service he brought to the organization. His vision, expertise and leadership significantly contributed to EJF’s success.  The announcement by some of the world’s leading Torah authorities that they will take an increased role in the Eternal Jewish Family is testimony of the organization’s strength and commitment to its core mission. The many people who benefit from EJF’s activities should know that the organization remains fully committed to its important mission, one which has helped thousands of people in their pursuit of a Jewish life.”

I have decided to resign my position at the Eternal Jewish Family (EJF) effective December 12, 2009 to pursue a variety of other interests. As a founder of EJF, I am proud of my role of being an architect of a very dynamic and important movement in our community.   I will in the coming months do my utmost to be of service to the Jewish community in any way I can. I am extremely enthusiastic that a distinguished Torah personality of the stature of Rav Ela Ber Wachtfogel has agreed to assume my position of Chairman of the Rabbinic Committee and that Rabbi Chaim Blum has agreed to serve as interim director of EJF. I wish every continued success to EJF, its rabbinic leadership and the extraordinary team of dayanim and dedicated individuals that serve the organization in many parts of the world.

It is with a deep sense of regret and yet renewal that I note a change in leadership of the Eternal Jewish Family that includes the agreement by Rav Ela Ber Wachtfogel to serve as Chairman of the Rabbinic Committee of the Eternal Jewish Family.  I hope that Rav Leib Tropper’s decision to resign his position at EJF will serve him and his family well.  At the same time, I have also agreed to take on a more active role in overseeing all of the halachic nuances of EJF in assuring that all universally accepted conversions are in compliance with the highest standards of halacha. I wish to reassure the community that EJF will continue to be guided by the highest halachic standards under the leadership of the Gedolei Yisroel, headed by Rav Wachtfogel and myself in the US, Dayan Chanoch Ehrentreu in Europe and Rav Shmuel Eliezer Stern in Israel.