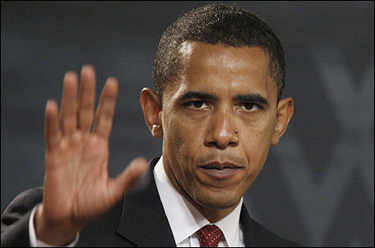 President Barack Obama says the foiled Christmas Day airliner attack exposed “a potentially disastrous” security failure and that al Qaeda will stop at nothing in its efforts to kill Americans. Obama said that the U.S. intelligence community had enough information to connect the dots ahead of time but didn’t.

“This was a screw up that could have been disastrous,” the president said during a meeting in the White House situation room, according to the White House media office. “We dodged a bullet but just barely. It was averted by brave individuals not because the system worked and that is not acceptable. While there will be a tendency for finger pointing, I will not tolerate it.”

President Obama said that the United States will halt all transfers of Guantanamo prisoners to Yemen for now, but insisted he is not wavering in his commitment to shut down the prison for terror suspects.

“Given the unsettled situation, I’ve spoken to the attorney general and we’ve agreed that we will not be transferring additional detainees back to Yemen at this time,” Obama told reporters following a meeting at the White House with 20 top security advisers to discuss why the U.S. government failed to prevent the attempted aircraft bombing on X-Mas Day.

“Make no mistake, we will close the Guantanamo prison, which has damaged our national security interests and become a tremendous recruiting tool for Al Qaida,” Obama said. “We will close the prison in a manner that keeps the American people safe and secure.”

Obama has said the X-Mas Day bombing plot was hatched in Yemen, an extremist haven on the Arabian Peninsula. The U.S. Embassy there closed Sunday and Monday because of a terrorist threat. The suspect in the attack, Umar Farouk Abdulmutallab, has reportedly told the FBI that he crafted the plot with Al Qaeda operatives in Yemen. In addition, the Al Qaeda branch there claimed responsibility for the attack.

Immediately after taking office, Obama had pledged to close Guantanamo Bay prison by this month, but that plan has been delayed by a series of setbacks, including resistance in Congress to bringing the prisoners to the United States and difficulties finding other nations willing to take the men.

Yemeni nationals make up nearly half of the remaining 198 prisoners at Guantanamo, and part of Obama’s plan to close Gitmo involved sending many of them home.

White House Press Secretary Robert Gibbs acknowledged that the decision not to send any more of them back to Yemen soon could mean that an added number of them will have to be transferred to a new prison for former Guantanamo detainees that the administration hopes to set up in Thomson, Ill. There was never a plan to transfer the Yemenis as a group back to Yemen, White House aides said.