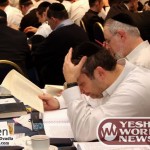 [VIDEO & PHOTO LINKS BELOW] Day 4 of the Agudas Yisroel’s Yerushalayim Yarchei Kallah  got off to a solid start with a packed beis medrash full of lomdim who were clearly at home, both with the material and the environment, the heiligeh avir hamachkim of Eretz Yisrael and the impromptu beis medrash made possible by the Aguda’s ingenious oftu — a thick sefer containing all possible marei mekomos, meticulously indexed so that the marei mekomos could be located in seconds, instead of having to roam around shelves in search of a Mishkenos Yaakov or the Ketzos.

With his trademark poise and air of authority, Harav Baruch Mordechai Ezrachi, Rosh Yeshivas Ateres Yisroel delivered a fiery shiur that was k’nisinasso m’Sinai. He led the lomdim methodically through the shitos acharonim concerning the chilukei halacha between bris mila and hatafas dam bris.

Although the allotted time for the shiur had long passed, the oilam was clearly not finished; several dozen lomdim engaged Harav Ezrachi with more she’eilos and he’aros on the sugya, until he had to leave to give shiur in his own yeshiva.

Next came a  seder hachana in which the lomdim readied themselves for the second iyun shiur of the day to be delivered by the renowned maggid shiur Harav Dovid Cohen, Rosh Yeshivas Chevron. The excited anticipation was palpable as the Rosh Yeshiva made his way through the Yarchei Kallah beis medrash and took his seat behind the shtender to begin his shiur.

Harav Cohen expertly defined the interplay between maasei mitzva and hidur mitzvah, elucidating intricate chilukim between shitas Harambam and shitas Hatur in the sugya of tzitzin she’einan me’akvin b’mila. Harav Cohen concluded by applying — halacha lemaaseh — using the yesod he had clarified ,for other mitzvos including hadlakas neiros Chanukah.

Thursday afternoon, the final seder of this year’s Yarchei Kallah the lomdim put all their kochos into their preparations for the shiur of Harav Dovid Feinstein, Rosh Yeshivas Beis Yehuda. Harav Feinstein electrified the entire Yarchei Kalla beis medrash with his intense analysis of the chiluk in lishma between bris and most other mitzvos that require lishma (such as Sefer Torah, matzah, tzitzis and gittin). Beholding the Rav’s intensity, allowing the s’vara to animate his entire being, was a lesson in the pachad v’retet that Chazal speak of as the appropriate mindset for learning Torah. He concluded with equally fiery words of mussar on the importance of chinuch habonim for Torah and mitzvos.

Harav Simcha Kook, Chief Rabbi of Rechovot brought the Yarchei Kallah to a close with guiding words on the special relationship between Hakadosh Baruch Hu and Klal Yisroel. He noted the difficult global situation and Am Yisrael’s role in tefilla, and even more so in Torah. Even if the world were devoid of tefilla, the world would not return to tohu vavohu, but if the world is devoid even for one second of Torah, this would return the world to tohu vavohu. He concluded by blessing the lomdim to continue,in this critical period ,to uphold the world through Torah study as they return to their weekday routines.

With the mixed emotions of joy and sorrow; joy for the precious, unique kinyan HaTorah, made in the company of true mevakshim (you don’t fly 6,000 miles to learn if you’re not a mevakeish) in the heady presence of Gedolei Roshei Yeshivos and Gedolei Poskim; and sadness for the ending of this lofty experience, the tenth Yerushalayim Yarchei Kallah drew to a close. Over a light farewell seudah sponsored by the Agudas Yisroel of America, the lomdim took leave of each other, bringing new meaning to Chazal’s statement, “one must take leave of his chaveir only mitoch dvar halacha.”

YWN VIDEO LINK: Click on the following link for video of Day 4: http://www.theyeshivaworld.com/video_viewer.php?clip=OavitGkSJPQ&player=y