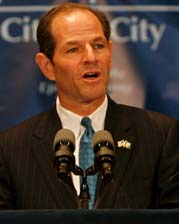 Disgraced ex-Gov. Eliot Spitzer took another step back into political spotlight Sunday, appearing for a chatty interview at the 92nd Street Y on the upper East Side.

Spitzer has been staging a comeback of sorts with increasingly frequent appearances on TV news shows, a regular column in Slate Magazine and sit-down interviews with individual reporters.

His appearance at the 92 Street Y on the Upper East Side last night was one of his first before an unpredictable live audience of nearly 1,000. The audience included his wife, Silda, who declined to comment on her husband’s political prospects. “I’m here off the record tonight,” she said.

Some came ready to despise the ex-gov.

“He destroyed a family. He destroyed a government and I don’t think he should be able to have a stage,” said a woman who gave her name only as Amy.

He knocked Bloomberg for the mayor’s robust defense of Wall Street as the city’s chief industry. “Mike’s a friend but I think he’s fundamentally in error,” Spitzer said.

He twice referred to Cuomo as “presumably” the state’s next governor but said he won’t consider endorsing him until Cuomo answers questions about issues like health care and charter schools “and shows the fortitude to answer them the right way.”

When asked by an audience member why he chose David Paterson as lieutenant governor, he called his successor “a very bright individual.”

He said he chose Paterson to help him work with the State Senate and its then-leader Joseph Bruno, but refused to answer a question about why Paterson has had so much difficulty governing. “It’s an answer that speaks poorly of Albany, not David,” he said.